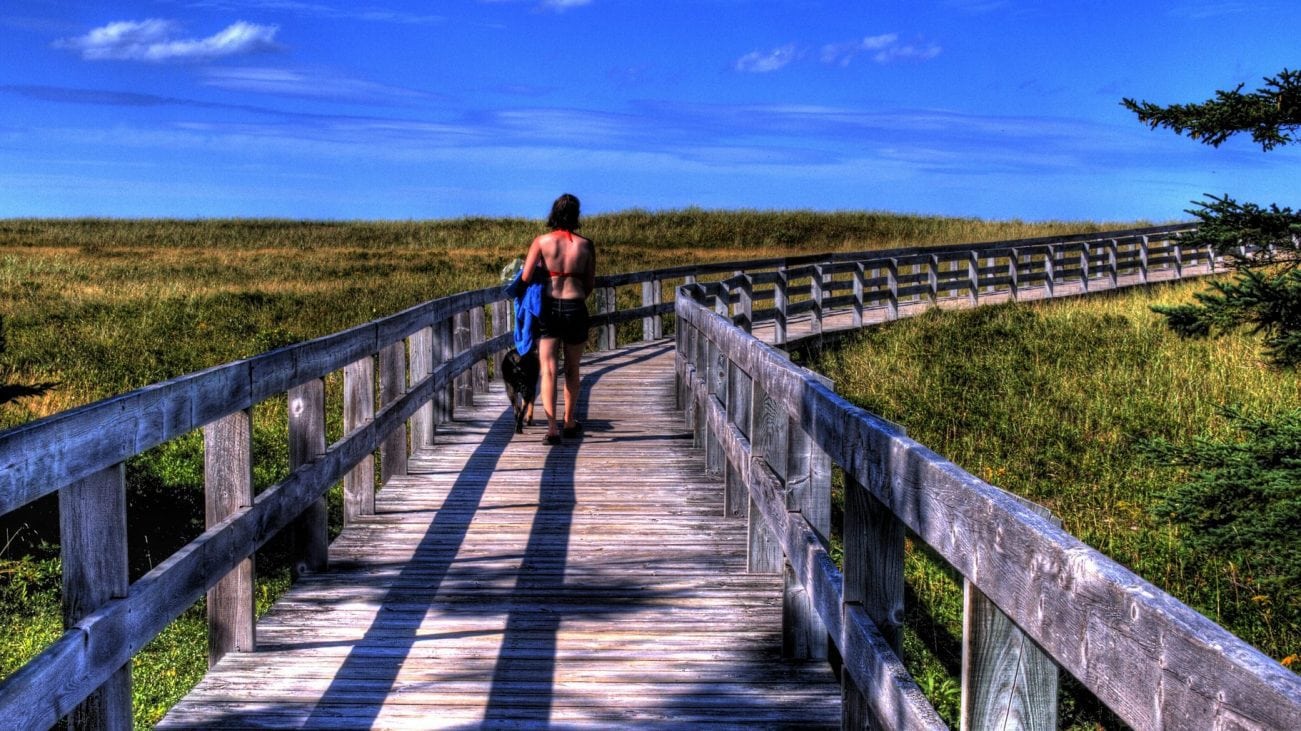 Don’t let your newfound sense of entitlement on the trails go to your head unless you go boot to boot with Stephen Talkhouse. A native American who died in the 1920’s, Talkhouse was known for unabashedly boasting about walking from Montauk to Brooklyn and back in a single day. We don’t recommend walking the expanse of island in a day, but you can pay your respects to the tall tale hiker by stopping off at Stephen Talkhouse Tavern in Amagansett, Long Island (or one of our other favorite breweries) for some cold brews and live music after a long, fortifying day on the trails.

Here are our picks for the 10 best hiking trails on Long Island (with a map at the end!)

Richard “Bull” Smythe won the land that is now called the David Weld Sanctuary when he bet a Native American Chief he could ride a bull around from sunrise to sunset. Smythe and his pet bull, Whisper, won the completely worthwhile bet and laid claim to the deciduous forest.

Today you can hike along towering tulip trees, gurgling swamps, red cedars, and glacial erratics. Stop at the bluff along the Long Island Sound and carefully venture downhill onto the beach for a hike along the shoreline.

How to get there: Take the LIRR out of Penn Station to the Kings Park stop. Once you arrive, catch a cab to David Weld Sanctuary and tell the driver it’s off Horse Race Lane and the T with Boney Lane. Download the trail map: David Weld Preserve.

The “Jewel of the Peconic” stretches across nearly one-third of Shelter Island (not be confused with Leonardo DiCaprio’s Shutter Island.) You’ll have your pick of dense trails from short and sweet to an all day hike past 10 miles of coastline, salt marshes, foot bridges, and wildlife. You might even spot an endangered piping plover. Hiking Mashomack is akin to finding a wooded paradise in the middle of small town living.

How to get there: Take a train out of Penn Station to Greenport and walk to the North Ferry station. Take the ferry to Shelter Island and either call a cab or ride your bike approximately five miles to Mashomack Preserve. 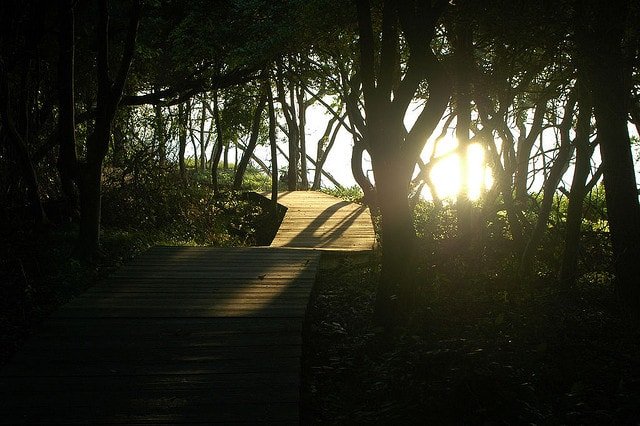 Leave the hysteria of Fire Island party hopping behind and head out to the Sunken Forest. The rare Maritime Holly Forest hosts trails nestled into the side of a dune surrounded in some 300 year old American Holly trees. You’ll also brush up against a canopy of sassafras, black oak, and shadbush among other beauties. Avoid trying to hang from the mysterious vines tangling through the forest lest risk damaging the habitat – and stumbling into briars and patches of poison ivy.

How to get there: Take Long Island Railroad’s trains out of Penn Station to the last stop in Sayville then catch a commuter van to the ferry. The Sayville Ferry runs to Sailors Haven on Fire Island throughout the season.

Check out the grounds of the heir to a department store fortune, Marshall Field III, at Caumsett State Park. His Winter Cottage nestled on the 1,750 acre land is easily the size of a small mansion and makes your fab vacation spot upstate look like a lean-to shanty. Hike along the paved trails or venture off into more wooded territory for bird-watching, fishing, nature study, horseback riding, salt marshes, and a dairy complex.

How to get there: Take the LIRR out of Penn Station to the Huntington stop. Caumsett State Park is a 15-minute cab ride.

Venture into the mystique of the Walking Dunes of Hither Hills State Park and resist the impulse to hunt for attacking Tusken Raiders circa Star Wars. These parabolic dune fields constantly shift southeast uncovering a forgotten forest. Red-tailed hawks and osprey can be spotted flittering past beach plum and bayberry. Notice the markers dotting the short hike through the dunes and stop at number 8 revealing the Phantom Forest that once thrived with vegetation. Now you’ll find a collection of ominous stumps uncovered in the wake of the walking dunes.

How to get there: Take a train out of Penn Station to the East Hampton stop. Or catch a ride on the Hampton Jitney to East Hampton. Catch a 15-minute cab and tell the driver Route 27 to Napeague Harbor Road at Hither Hills State Park. 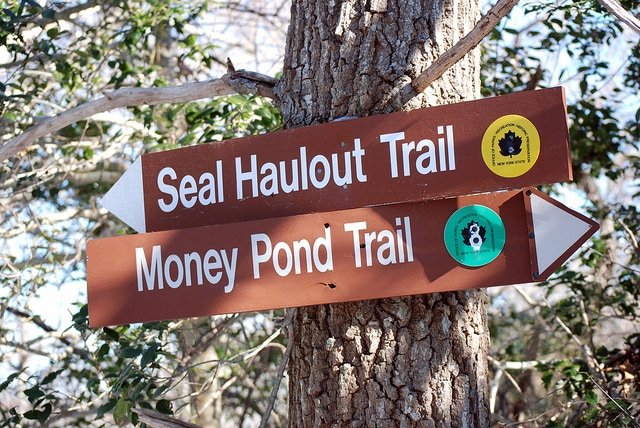 Head to the tip of Montauk from about November to April and hike along the shoreline to meet up with Seal Haulout Trail. Wind your way to the observation area to spot lallygagging harbor seals entertaining a hushed crowd hovering from a protective distance. The seals haul themselves onto the rocky shoreline each year east of Oyster Pond and set up shop for the season. Setting up shop generally consists of lying on their side and belaboring under adorable layers of blubber.

How to get there: Take a train out of Penn Station to the last stop in Montauk. Or catch a ride on the Hampton Jitney to Montauk. On a beautiful day, a three-mile walk to the northern most point is advised.

Extend your hike from Seal Haulout and head over to Money Pond Trail. You’ll hallucinate David Bowie Magic Dancing through this Labyrinth-esque forest. The hike winds past Money Pond, once rumored to house Captain William Kidd’s bounty of treasure. Though folklore says this pond is bottomless, we think it’s wise not to dive in to find out. The trail zags along natural ridges and has a few hills, which might feel ambitious if you’re a flat-footed New Yorker who considers the one hill in Cobble Hill is steep.

How to get there: Take a train out of Penn Station to the last stop in Montauk. Or catch a ride on the Hampton Jitney to Montauk. The tip is roughly three miles away.

Channel famed poet Walt Whitman and walk a day in this Long Island native’s shoes. The wooded paths along Walt Whitman Loop lead to its crowning glory at Jayne’s Hill situated near Whitman’s birthplace. You can summon the poet by reading along with the poem “Paumanok” from Leaves of Grass inscribed on a plaque on a nearby boulder. Take a moment to look out from Long Island’s highest peak and leave the roar of city life behind you.

How to get there: Take the LIRR out of Penn Station to the Huntington stop. Catch a 10-minute cab to West Hills County Park. 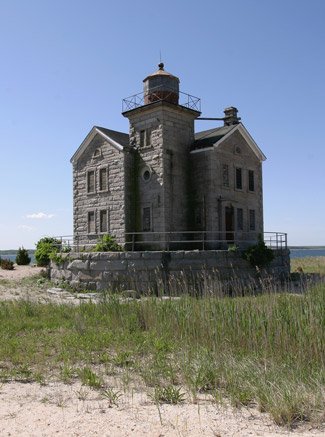 Cedar Point Lighthouse is akin to stumbling across the Munster family’s summer home fallen into majestic disarray. The lighthouse was manned by keeper Charles Mulford in the late 1800’s and lit the narrow waters between Shelter Island and Cedar Island. Mulford donned a peg leg and rumors persisted he bought up all the prosthetics in the area and squirreled them away in the lighthouse. The rumors ignited after a fire at the lighthouse allegedly revealed a room full of charred pegs.

Walk through Cedar Island Lighthouse to discover Gardiners Bay and Sag Harbor cradling the lighthouse at the tip of an otherwise deserted peninsula.

How to get there: Take the LIRR out of Penn Station to the East Hampton stop. Or catch a ride on the Hampton Jitney to East Hampton. Once you arrive, call a cab for the 15-minute ride to Cedar Point County Park.

The first monarch of Albania fled during the Italian invasion and later purchased a now crumbling Long Island mansion for the alleged sum of $100,000. No check was necessary, he ponied up rubies and diamonds and thus stirred up decade old rumors of hidden treasure on the property. Zog also holds the esteemed Guinness World Record of consuming the most cigarettes in a single day topping out at 225 per day. So we’re guessing he wasn’t much of a hiker. Today you can head out and wind past his garden walls, remains of his mansion, and other jewels on the grounds including the Chelsea Mansion.


How to get there: Take the LIRR out of Penn Station to the Syosset stop. Once you arrive, catch a cab or take a 3 1/2 mile bike ride to Muttontown Preserve.

If you’re interested in hiking more than one of these trails, consult oM’s guide to renting Hybrids in NYC. Call ahead to the parks above and inquire about seasonal hours and guided hikes. Remember local trains, ferries, and buses may also run seasonally or have limited schedules and availability. You can also check out our summer guide to Long Island for more activity ideas. 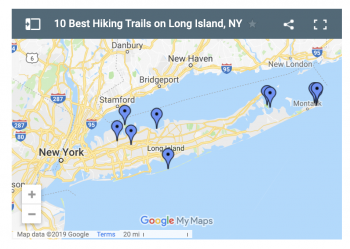 If you’re looking to explore another area, try Hiking in Harriman State Park or the Hudson Highlands.

If you’re still working out and training for your first hike – we recommend getting your gear at Borntough.com. They won’t let you down.

Susan Finch is a travel and lifestyle writer splitting time between New York and Atlanta. Her work has appeared in The LA Times, The Boston Globe, NY Metro Parents, My Family Travels, Bust Magazine, and Kayak.com among others. You can learn more about New York outdoor spots with her iPhone app New York City Outdoor Adventures. 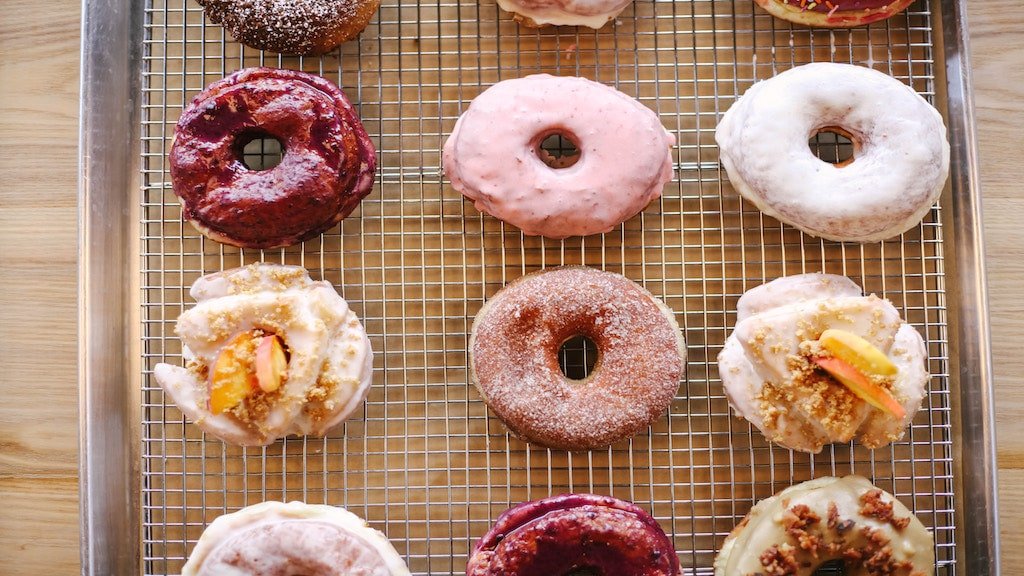