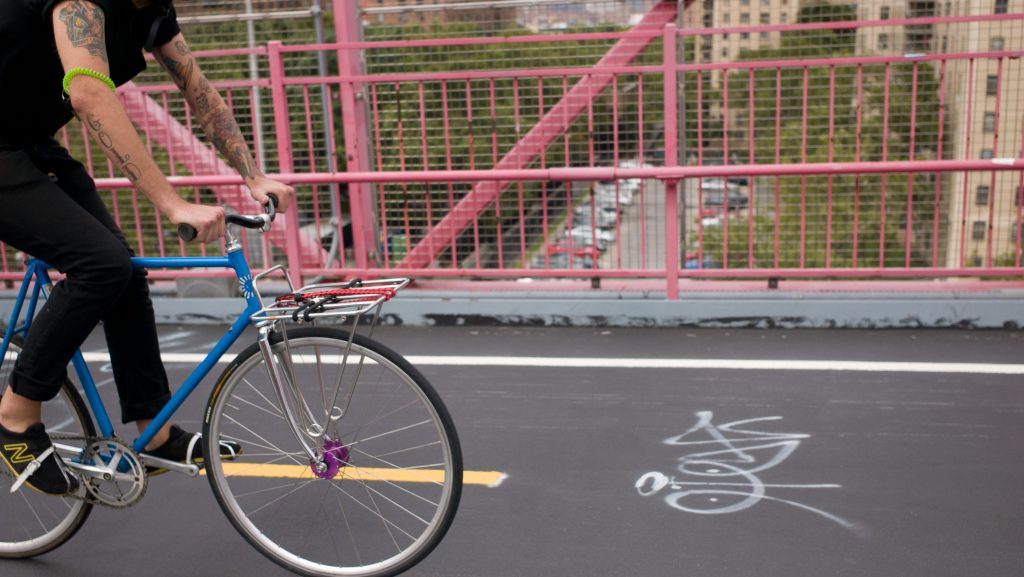 Any hint of a bitter cold winter is now long gone and a steady stream of 70-degree days lie ahead. This means it’s time to get that bicycle greased up and out of storage, and start riding again. If you live in Manhattan, you know that the biking options are so much better than they were even a few years ago. Central Park offers weekend riders a 6.2 mile car-free loop in the company of tens of thousands of people running, walking dogs, rollerblading, and biking. If you want to stick to the rivers, you can ride from Battery Park along the Hudson River Greenway all the way up to the Little Red Lighthouse under the George Washington Bridge (and beyond) or follow the bike paths up the east side along the East and Harlem Rivers. But that’s it unless you enjoy living on the edge with angry cab drivers cutting you off, trucks and cars parking in bike lanes, and pot holes so deep and ragged that they can destroy your bike and leave you, to put it lightly, splattered on the pavement.

My advice: get off Manhattan via one of the 16 bridges that allow bicycles. While some of the bridges lead to nowhere you would want to go, several of them offer spectacular vistas of Manhattan and the bodies of water that surround it, plus the opportunity to explore diverse and unusual neighborhoods just a few pedal pushes away.

The bridge’s car-free bikeway leaves a lot to be desired, but once you get across the river to New Jersey, you will have access to one of the hidden treasures of the Garden State: the lower Palisades Park has miles of smooth roads with spectacular views undulating along the western banks of the Hudson River. Getting on the bridge from Manhattan requires good biking skills or a willingness to walk up some tight pathways. Once on the bridge, the path is so narrow in places that you’ll swear that there must be constant collisions with other bikers; somehow, I’ve never seen one. Some riders come to a full stop to allow more aggressive riders to pass by. Go slowly and all will be well.

This classic ride has been written about by everyone, so there is no need for me to wax poetic. Access to the pedestrian walkway and shared bikeway is effortless.  About a third of the car-free path is tightly-spaced wooden boards and the rest is smooth concrete.  The views in all directions are breathtaking from the Statue of Liberty in New York Harbor to the skyscrapers in lower Manhattan and Midtown.  Brooklyn’s expanding skyline is also a surprising treat.  Once you’re in Brooklyn, there are numerous bike paths and fascinating communities to explore.  Check out the Brooklyn Heights Esplanade, Atlantic Avenue, Smith Street, Red Hook, Cobble Hill, Prospect Park, numerous cultural attractions, and an endless assortment of ethnic neighborhoods from Italian to Senegalese. Note: during the summer tourists crowd the bridge so we recommend checking it out early in the morning or in the “off” season.

These two will lead you to some of the constantly changing neighborhoods in Brooklyn. While there are bike paths everywhere once you get over the bridges, the ride itself is not particularly appealing. The bike path runs along side the structure near the roadway, so your views are restricted and the traffic noise is constant.

The old metal drawbridge at the northern tip of Manhattan gets you to the Bronx.  With some advanced planning, you will be able to find your way to the bike path that starts near Van Cortlandt Park and runs above the Croton Aqueduct for more than 40 miles through Westchester and into Putnam County . . . with no automobile traffic to fight.  It’s a beautiful ride at any time of year.

This pedestrian and biking path starts at East 103rd Street. Though it used to only be open seasonally, a $1.5 million renovation in 2012 means it’s now open year round.   It will take you to Randall’s Island and Ward’s Island Park.  The bridge offers nice views of the river and the city.

While this bridge is open to cyclists year-round, it really shines as the ideal summer route to get to the Rockaways. While it does get narrow at a few points (prepare to get off your bike) the beauty of Jamaica Bay and relative quiet makes it worth your while.

Queensboro Bridge. This car-free bike path runs alongside the bridge’s superstructure so traffic noise is constant and the views are limited. While accessing the bridge on the Manhattan side can be harrowing, once you get to Queens though, there are bike paths to be found, especially in nearby Long Island City.

Robert F Kennedy Bridge (formerly known as the Triboro Bridge). The struggle is not worth it. You have to carry your bike up stairs then walk your bike across the bridge, although most bikers ignore this annoying rule. There is endless traffic nearby and once you get to Queens there is no easy access to any inspiring bike paths. Why bother?

The remaining “bike-friendly” bridges are not worth the effort unless you are delivering a pizza to one of the locals on the other side. Avoid the Willis Avenue Bridge, the Third Avenue Bridge, 138th Street Bridge (also known as the Madison Avenue Bridge), 145th Street Bridge, and the Macombs Dam Bridge. They all allow bikers, but their road surfaces are terrible, not at all bike-friendly because of potholes, ridges, and metal grating. Think it might be exciting? You will be taking your life in your hands.

The Washington Bridge (not the 181st Street Bridge) has just a bike lane alongside the traffic.  And the University Heights Bridge, which crosses the Harlem River into the Bronx on West Fordham Road leads you to very crowded streets not designed for either serious or casual bikers.  The final potential ride off Manhattan is the Henry Hudson Bridge. It’s hard to get to from either Manhattan or the Bronx, and the pedestrian and bike path has been closed due to construction for the last four years. It is scheduled to re-open late June 2010, but if you must get to the Bronx now, head to the Broadway Bridge (see above).

If you want to read more, check out these 8 Bike Maps that include street maps of all of the bike paths and routes within the five boroughs.

Map of Recommended Bridges for Biking