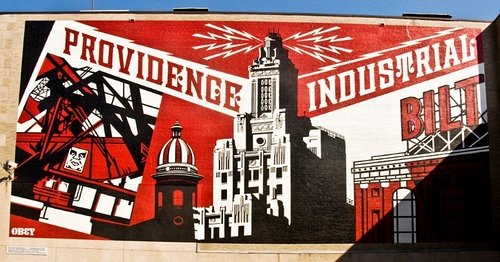 The man who made Barack Obama an even more dazzling candidate for President with his “Hope” “Change” and “Progress” posters, has been busy with a campaign of his own. Shepard Fairey’s latest street piece, “Providence Industrial”, is located on Aborn between Washington and Westminster. Although the notorious artist took a commission of $5,000, raising money for AS220, a non-profit, grassroots community arts space, is the impetus behind the design.

oM exchanged emails with the Rhode Island School of Design graduate about his new 38-foot-by-80-foot mural, his old stomping grounds in the “Creative Capital,” what he plans to paint next—and if his hands will make a return to the walls of NYC.

oM: How long did it take to complete “Providence Industrial” and what first image inspired you to begin, was it the “Bilt” sign?
SF: It took me about two weeks working off and on to design the mural, poster, and tee shirt. I knew which Providence sites I wanted to include, but it took a little while to do the illustrations and compose them in a way that all worked together. I knew I wanted the former Industrial Trust building to be the centerpiece, and the Biltmore is an architectural landmark as well. It just made sense to crop Biltmore to “BILT” for a little wordplay on “built.”

oM: “Providence Industrial” speaks to meaningful landmarks, but could you comment on some of your favorite hangouts? Was there one local spot you loved during your time at RISD?
SF: I did my first art show at Fellini’s Pizzeria on Wickenden St. in 1990. I used to print shirts and stickers for them. My friend Al Read worked at and now owns Nice Slice Pizza on Thayer St. They make the best pizza I’ve ever had. I used to always eat at a diner called Louis on Brook St. I ate at NY Systems in Olneyville a lot too. None of these places are upscale, but they are cheap (I was broke back then) and good with a lot of character. I used to drink beer and play pool at Trinity Brewhouse. The food at AS220’s restaurant is great. Most of the music venues I frequented are gone except Lupo’s Heartbreak Hotel.

oM: How often do you revisit Providence?
SF: I’ve only been back to Providence four times since I left in 1996.

oM: Do you use any eco-friendly products when you work? (Or have you tried, but they weren’t as good?)
SF: I used oil-based printing inks when I was in Providence, but I switched to water-based when I moved to California. I made the decision for my own health and the health of the planet. The performance of water-based inks is almost as good and very worth the trade off for the health benefits. I do still use some spray paint, but there is no healthy alternative.

oM: I was sorry to hear that your mural on Houston and Bowery was defaced, but will you still come back and do more street art in Manhattan and the outer boroughs? (We’d like to include you in our next self-guided graffiti tour.)
SF: I will always do street art in NY.

oM: Next big project?
SF: I’m working on the book about my MAYDAY show in NY and I’m always doing new projects. I’m designing and doing a mural in a bar interior in Miami. I just did some work to benefit the Gulf of Mexico spill.

To visit Fairey’s mural and check out some of the artist’s favorite places in town, consult the map below. For directions, see offManhattan’s public transportation guide to Providence. For more ideas on things to do, read oM’s A Closer Look at Providence’s Cultural and Culinary Attractions. You can catch more of Fairey’s work in Brooklyn at the Music Hall of Williamsburg. 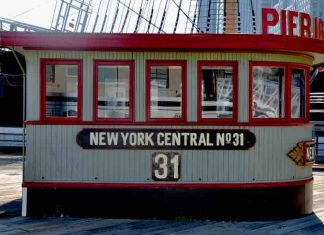