Home Texas San Antonio Things to Do in San Antonio: Southwest City With a Bright Green... 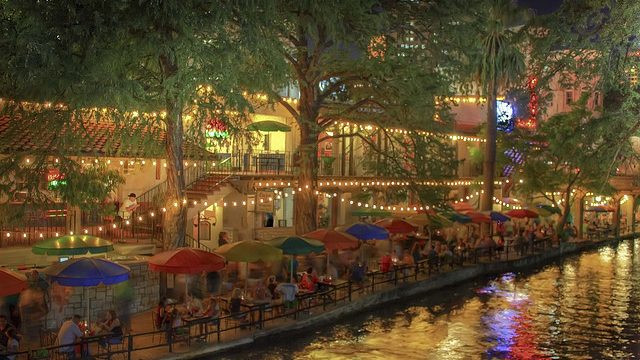 Ah, Texas. Your name conjures visions of cowboy hats, twangs of country music, and tastes of barbecue (with a hint of cilantro). But as a general rule it does not glow in big green letters. Not, that is, until you meet San Antonio. This vibrant southwest city is high-kicking its way into a green future, all while holding tight to its fascinating roots.

Texas’s second largest city somehow manages a small town feel. But, lest you forget you’re in that enormous state where everything seems bigger, “small town” San Antonio hits you big with everything else—from scrumptious cuisine to southern hospitality. During my recent visit, I set out to sample a little bit of everything. Read on for oM’s favorite things to do in San Antonio.

Today the San Antonio River, zig-zagged with pretty bridges, is so picturesque it looks as though it was plucked out of Disneyland and dropped at the base of Texas Hill Country. But one can’t forget it’s the bloodline of the city’s past, present, and future. In the late 17th century, the Spanish established Mission San Antonio de Valero on its shore, the very mission that would solidify the city’s place in history when it became forever remembered as the Alamo.

Frederick Law Olmsted once quipped that only San Antonio rivals New Orleans in “odd and antiquated foreignness.” This nearly a century before the River Walk—itself reminiscent of something the Central Park architect might have dreamed up—came to life. The statement still holds true. Lined with colorful umbrellas and wrought-iron balconies, the River Walk is a fetching stretch of scenery. Peppered with the sounds of mariachis serenading and the dizzying flurry of life well-lived, the River Walk is the heart of the city.

Today everything’s coming up green along the river, and not just the ancient bald cypress trees that shade its sidewalks. In what is our nation’s largest urban ecosystem restoration, San Antonio is expanding the River Walk from 1.3 to a whopping 13 miles, preserving history (and making it) along the way. In addition to the planting of trees and native landscape, the first segment, completed in 2009, added flashy character: Museum Reach is adorned with incredible public art installations, including an ethereal grotto, an intriguing urban soundscape, and a restored Works Progress Administration mural.

All this means more spaces to enjoy on foot, but the city isn’t stopping there. An entire bicycle and pedestrian program is in the works: Come early 2011, San Antonio will be home to the first bike share in Texas, and one of too few in the country. Already miles of bike routes link missions, cultural attractions, and parks, and soon bikers will have 14 docking stations at which to pick up and drop off bikes. (Until then, rent your wheels, for $28 a day, at Alamo Bike Rentals. They’ll even deliver to your hotel.)

Up at the end of Museum Reach, biking is only part of the eco-revolution. Iconic Pearl Brewery, an 1881 landmark, is fast becoming a lively urban village—and the biggest little solar power project in Texas. Here you’ll find an Aveda Institute and yoga studio in what was once a Can Recycling Building, plus a former warehouse now home to a nature conservancy, an architecture institute with regular exhibits, and unique shopping experiences. This latter building, with its beer filter chandelier-cum-cooling-system, is the “learning laboratory” for environmental initiatives, but all buildings in the complex are doing their part, with solar energy resources, water collection systems, and more.

It can’t be much of a coincidence that the Spanish word for “flavor” looks so much like “savor.” Pearl has much in the way of savoring: Its restaurants include a seafood haven and an Italian “dream”. Then there’s the glorious La Gloria, a fresh, spicy, and flavorful homage to authentic Mexican street food. But the star of the show is the new Culinary Institute of America campus, with its Latin focus and specialized outdoor kitchen. That’s to say nothing of the Saturday Farmer’s Market and Wednesday food marketplaces.

Pearl is not the only place that’s changing the way San Antonio thinks of food, though. Back downtown, new restaurants are popping up, and the local food movement is, well, on the move. Inside Mokara Hotel, the sleek, modern Ostra opens onto the Riverwalk in perfect earshot of a rushing waterfall, which, incidentally, is an ideal setting for enjoying the delicious, seafood-heavy (ostra is Spanish for “oyster”) menu of chef John Brand, who sources locally whenever possible and has plans for a garden atop the Mokara.

Formerly the Watermark Hotel, the Mokara Hotel & Spa recently brought its own decadent brand of luxury to San Antonio. Named for a rare orchid with healing properties, Mokara’s motto is “exceptional included,” and the property does not disappoint. This is southern hospitality on a whole new level. The folks at Mokara know it’s the little touches that count. That’s why there are “little” touches throughout their sumptuous property. From the jug of yummy Mexican fruit juice in its gorgeous lobby to the linens spritzed with soothing lavender at nightly turndown, this hotel leaves no detail forgotten. (From $269 for weekend rates, $250 for midweek rates.)

All this before you get to the Mokara Spa, a soothing oasis with an array of signature treatments that will send you to nirvana with just their descriptions. But the Mokara is very precise in its terminology: Guests come for an “experience” rather than a “treatment,” meaning you’re not only invited but encouraged to steam out your toxins in the sauna, luxuriate in the whirlpool, or simply take a nap in the tranquil relaxation room. All spa visits include access to the heated rooftop pool (with its stunning views), and day packages throw in lunch in the rooftop cafe, a happy excuse to dine in one of the spa’s plush robes. Talk about tasting Nirvana.

How to get there: Most of the major airlines fly from New York to San Antonio, though it’s not uncommon that you’ll have to transfer somewhere in between. Air Tran and Southwest often have some of the best rates, and Delta recently added nonstop flights between JFK and San Antonio International (SAT). Once in San Antonio, many hotels have airport shuttle services, or you can hop on the Airport Express, a shared shuttle service, for $18 one-way ($32 round-trip). For less expensive hotel rates with the same amount of southwest charm, check out the Oge House, Inn on the Riverwalk, from $199 or the Bonner Garden Bed and Breakfast, from $119.

View A Getaway to Green San Antonio, Texas in a larger map 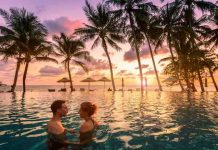 A Short Guide To Planning A Romantic Couples Getaway 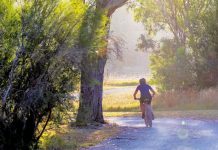 Skiing and Snowboarding in the French Alps by Train

Bringing Vape Juice on an Airplane? Here’s What You Need to...