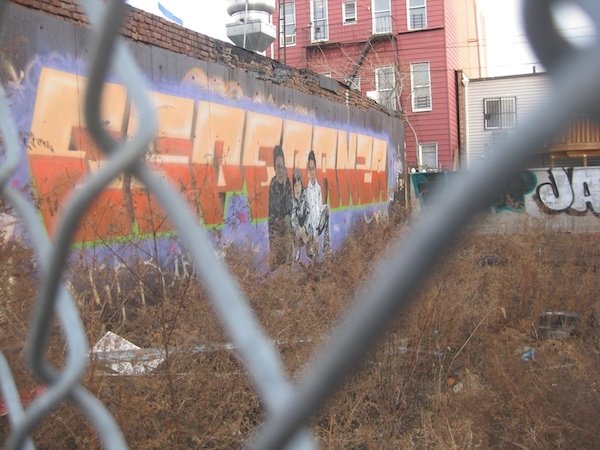 While some of New York’s best graffiti spots may be hidden or inaccessible, aficionados can still find a variety of artwork, including throw-ups, murals, stencils and wheatpastes, just a short subway ride from Union Square.

East Williamsburg and the outskirts of Bushwick have long attracted graffiti artists who compete to display their work on the side of abandoned factories, vacant lots, and decrepit buildings. The availability of many legal walls have made it possible for some artists in Bushwick to pursue the transition from vandalism to legal painting. Legal walls are a focal point of debate between graffiti enthusiasts and detractors. But whether they discourage vandalism or not, different types of artists, including wheatpasters, jump at the opportunity to paint large murals or stencil pieces on legal sites.

Legal walls are often provided by commercial and industrial owners that want to fill up empty space on the side of their properties. Artists sometimes solicit walls individually after developing a portfolio, and can also be contracted by proprietors through graffiti crews and galleries.

The selection of a good legal wall is important. Graffiti artists, like advertisers, focus on the visibility of the wall and the quality of its surface. Flat concrete walls for instance are much easier to paint and are longer lasting than corrugated metal. Every detail is important because artists use these walls as a large canvas for their most complex pieces.

While on a recent walk through Brooklyn, we found many legal walls and some illegal types of graffiti. Below you will find an improvised tour of some of the most innovating styles in this outer borough. And if you like this tour, check out part I of A Self-Guided Brooklyn Graffiti Tour.

How to get there: Take the L Train from Union Square to the Morgan Avenue Station. Then proceed on foot at your discretion with the self-guided tour of the featured graffiti sites.

Before starting your tour we recommend stopping for coffee or tea at The Archive Café (49 Bogart St., bet. Grattan St. and Moore St.) Aside from their occasional movie screenings and arthouse film collection, they also serve bagels and sandwiches. For lunch we recommend that you have a torta or taco at the Tortilleria Mexicana Los Hermanos (271 Starr St.,) or stop for a salad and soup at the Brooklyn Fire Proof Bar & Café (119 Ingraham St.)

Where to Find a Smartini: Secret Science Club