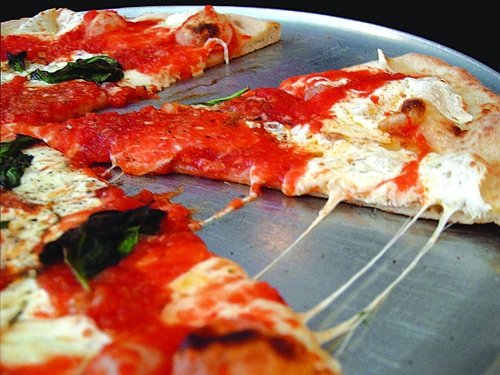 “My dad’s a barber, my mom’s a seamstress, and my brothers are named Vinny and Joey,” said Tony Muia of A Slice of Brooklyn Pizza Tour, turning up his thick Italian accent to humor the busload of passengers. “You can’t make this stuff up. I’m a first-generation Italian-American, and I know pizza. And in Brooklyn, we take our pizza very seriously.”

It was a sweltering day in early September, and the last thing I wanted to do was go on a 4 ½ hour bus ride through Brooklyn. My mom, visiting from California, had bought the tickets without consulting me. As we approached the pick-up point at Union Square in downtown Manhattan, I was certain the tour would be a Mecca for tourists.

As Tony cracked jokes and made sure everyone on the bus introduced themselves, what a pleasant shock it was to hear over half the crowd say they lived in Manhattan. I settled back into the comfortable coach seat as the engine revved, my enthusiasm growing, stomach grumbling.

Tony is the founder and guide of A Slice of Brooklyn Pizza Tour, a bus tour of some of the borough’s more interesting (and appetizing) areas. A young, charismatic Brooklyn native, Tony started the tour after friends continued to complain they couldn’t find decent pizza on Manhattan.

The bus tour stops at some of Brooklyn’s famous pizzerias and landmarks, all the while providing audiovisuals of popular movies and songs about the borough. By the time we departed from Union Square and went over the bridge into Brooklyn – with Frank Sinatra’s mellow “Brooklyn Bridge” playing in the background – I was hooked.

Tony sang along like he was in show business. “All the folks in Manhattan are sad/’cause they look at her and wish they had/the good old Brooklyn Bridge…”

The tour stopped in DUMBO for a quick history lesson and some great photo ops, before continuing on to Grimaldi’s (1 Front St, grimaldis.com). The eatery has been voted the #1 pizza in New York by Zagat and the line around the block attested to it. When you’re with Tony, you bypass the lines and get seated right away.

“Stick with me and you get the VIP treatment… er, as long as we stay in Brooklyn,” Tony said with a smile and a shrug.

The restaurant was lined with photos of Sinatra and other famous clientele. My mother and I rejoiced with strangers on our tour as we devoured several slices of delicious Neapolitan-style pizza.

Back on the bus, the tour led us through the less explored neighborhoods such as Red Hook, Bay Ridge, and Bensonhurst. On the way, movie clips featuring scenes of Brooklyn played on the TV screen at the front of the bus. You can’t beat driving down a random road and realizing that a ‘70s John Travolta strutted down that same street in the opening to Saturday Night Fever.

After another hour or so we stopped for more pizza, this time at Spumoni Gardens (2725 86th St., 718.449.1230, spumonigardens.com) in Bensonhurst. Unlike Grimaldi’s, this place served the thick Sicilian-style pizza. A passionate debate broke out at the table as to which was better, with Tony encouraging various pizza patrons to join in the fun.

We lumbered back on to the bus (at which point our full stomachs were tremendously grateful this was not a walking tour) and drove down to Coney Island and Brighton Beach. Tony walked us down the boardwalk while he told us a bit about the history of the area (not even trying to hide his resentment for the new developments). As we strolled, multiple passers-by stopped and said hello to Tony; he’s become something of a local celebrity.

The food was tasty and the sights and history were captivating, but the best part of the tour was Tony himself. He’s really just a young Italian guy who loves his hometown and his favorite food, and figured out how to make a living with it. If we could only all be so lucky.

“People don’t even realize who Brooklyn’s finest are,” Tony concluded as we rolled back into Union Square. “Adam Sandler. Mary Tyler Moore. Almost all the Sopranos. Biggie and Tupac. Even Bugs Bunny is from Brooklyn. But let’s be honest… none of ‘em hold a candle to the pizza.”

How to get there: Arrive at Union Square on 4th Ave. between 13th and 14th St. in Manhattan where you will be dropped off 4½ hours later. (A Slice of Brooklyn Pizza Tour, 212.209.3370, asliceofbrooklyn.com, $80 per person, pizza and beverages included)