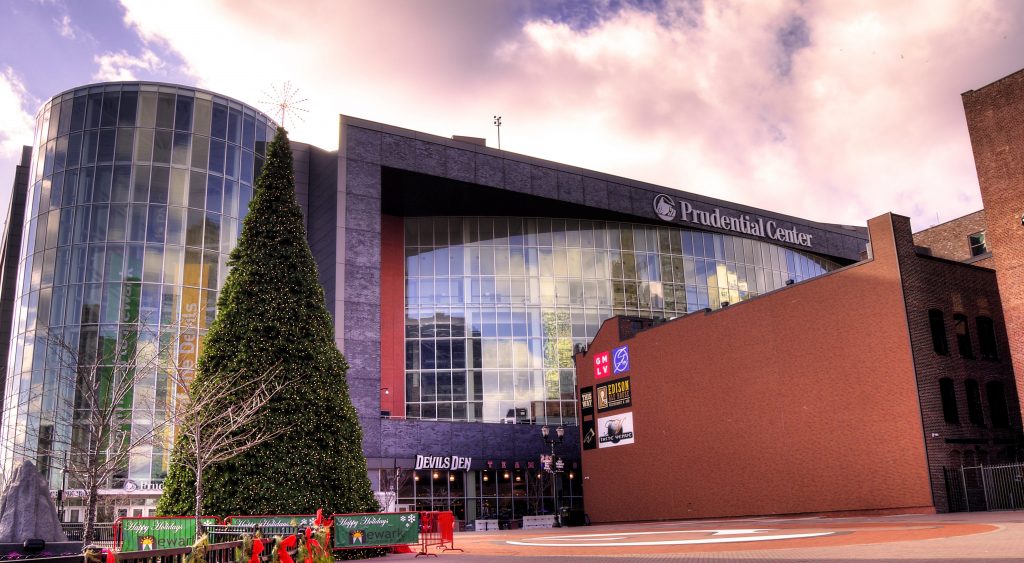 Madison Square Garden isn’t the only game in town any more. Across the river in the oft-maligned Newark, The Prudential Center is nearing completion. A $375 million dollar project long in the making, the center is scheduled to open on October 25th with a concert stint by Jersey boys Bon Jovi. For those seeking a sports game or a big-ticket concert, it’s an easy train ride to an arena with all the amenities for a night of spoiling yourself.

The concert schedule is still shaping up, but there are already acts to choose from for the concert-goer who likes sitting with 19,499 other fans. Not only is Bon Jovi going to be playing with supporters like My Chemical Romance, the All-American Rejects, and Gretchen Wilson (quite an eclectic mix) for a 10-show headlining stint, the concert calendar at The Rock, (as it is affectionately known) will boast other acts like R. Kelly and Ne-Yo, and the biggest ticket in the country, Hannah Montana. (I wish I was joking.)

For you hockey or college basketball fans, the Prudential Center is calling. It is the latest home for the New Jersey Devils hockey team and the Seton Hall University Division I basketball team, the Pirates. Fans of the Big East can watch heated rivalries among some of the best college basketball players in the country. Hockey aficionados can grab a high-class dinner while watching the boards quiver from bone-shaking checks.

Whether you’re a fan of Jersey sports teams or their New York rivals, you can watch them duke it out in Newark. Plus, sometimes there’s a bit of fun to be had when you’re rooting for the away team. Just keep your eyes peeled for flying popcorn and empty cups!

One of the biggest draws is the vast assortment of food – and not the typical stadium concessions that make you want to scrape out your arteries. Though arena-eaters are normally limited to less than gourmet fare, The Rock is offering something with a slightly more delicious, nutritional twist. Now hockey fans, present company included, and all other visitors, can sample fare from some great Newark restaurants. And yes, they do exist.

I’m personally looking forward to watching a Devils game while holding a warm panini from the Harvest Table in my hands. With ingredients like fresh mozzarella, goat cheese, fontina, sun dried tomato pesto, roasted turkey, and smoked salmon, the create-your-own paninis will be a huge step-up from nachos drenched in squirted-out liquid cheese. To experience flavors reminiscent of Kosher New York delis, order something from Hobby’s, a bastion in downtown Newark.

And, of course, no sports and concert venue is complete without its own bar scene. For once, an arena is pouring more than just the cheap domestic beer. The Fire and Ice Lounges – the latter has a bar made of ice, how clever – will provide people carting season tickets and club seats with all the liquor kicks and perks. Any guest of the arena may enjoy 11 different stations including a sushi bar and gourmet soups from another Newark lunchtime fave, Daily Soup. Best of all, you may drink and devour to your soul’s delight from seats that still keep you abreast of the on ice, on court, or on stage action.

Keep the Prudential Center in mind as a fun alternative to Madison Square Garden. Better yet, make it a getaway and explore New Jersey. Be one of the first to see a gorgeous, state-of-the art arena where the developers put in every possible crowd-drawing enticement, beginning with Bon Jovi.

How to get there: It is about a 10-minute walk from Newark Penn Station, which offers several options for getting in and out of the city. You can take NJ Transit (light rail, train, of bus) or hop on the PATH, which runs all night and leaves from the WTC downtown or 9th St to 34th St on the west side. Because the arena is supposed to be mass transit-friendly, NJ Transit and the Port Authority have even added trains to the schedule for before and after events so concert- and sports-goers don’t have to wait around for too long, especially when the Port Authority says it will have PATH trains on standby after events. If one train fills up, another will show up right behind it. (744 Broad St., Newark, 973.854.8760, prucenter.com)