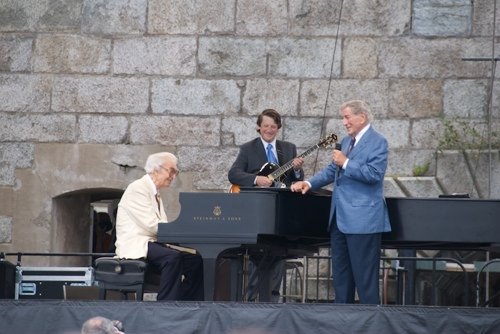 On a grey Sunday afternoon in August, I sat with tears in my eyes as Dave Brubeck played Take 5. The crowd, wearing palm-leaf hats and jackets, also watched with emotionally drawn faces as the 88-year-old pianist’s hands pranced across the keys, a slight smile on his own face. In a sea of privileged ears, witnessing one of the last remaining greats of a golden era making music had me wondering who could follow in the footsteps of “Time Out,” “Blue Rondo a la Turk,” and that song in 5/4?

This past weekend, I traveled four hours north of NYC to check out George Wein’s arrangement of the Newport Jazz Festival, something he first started producing 55 years ago. And just as late summer turned up raindrops and unusual degrees in the 60s, so too, did the genre of jazz show its powerful ability to change in magnificent ways.


In light of a recent Wall Street Journal article, “Can Jazz Be Saved?”, I approached the festival with a concerned curiosity about the current state of a form of music that had inspired me to sit down at the piano 19 years ago. “Look around,” said one 30-something passerby. “This big, diverse turnout is proof jazz is not dying—or anywhere near that.” I quickly scanned Fort Adams State Park: This one is Gen X, another Gen X, that one Gen Y, then Baby Boomer, Baby Boomer, Baby Boomer… I wanted to find more of my fellow Generation Y’ers. Either tickets were too expensive or jazz had simply lost its popularity among younger people. 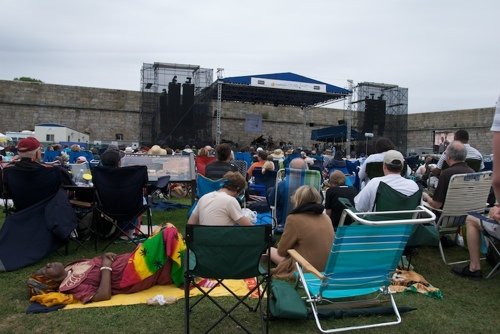 Then later that Saturday, under an electromagnetic tent, Hiromi’s Sonicbloom was a wake up call: this genre was alive and well and Gen Y was there to enjoy it. “I’m here to see Dave Brubeck, but mainly to see Hiromi Uehara work magic on the piano and three keyboards.” said Matt Pinto, a student at Berklee. “The element of improvisational music is not stopping at all, which means jazz is not in jeopardy. And the documentary screened here about Miles Davis at the Isle of Wight Festival in 1970, discussed how a lot of people at that time were saying ‘Oh, jazz is dead, jazz is dying,’ and then Miles went electric and it completely revamped [the genre].” Pinto’s friend Megan piped in, “Jazz is an expression of a culture, and it’s a culture that’s always changing.”

Accompanied by a bassist, drummer, and electric guitarist, Hiromi takes her cue from traditional layers of jazz, while infusing an energetic contemporary sound that seems to make a promise that jazz will not forget its roots, no matter how much it evolves. Hiromi’s Sonicbloom is touring Japan into mid-September, but check back on Hiromi’s site for upcoming local concerts; it’s an experience not to be missed.

“No doubt about it, there is a conscious effort to put a mix of new and seasoned artists on the festival as well as a variety of styles of music,” said George Wein, upon being asked to comment on the lineup of this year’s festival. “Without presenting new people and sounds, the future of jazz is limited. Without presenting the seasoned performers, the history of jazz could be overlooked. By bringing together the seasoned and the newer artists, performers are able to share ideas and learn from each other.”

When Dave Brubeck joined Tony Bennett on stage Sunday evening for the first time in 50 years, it was a fitting, bittersweet end to a three-day event jam packed with 12,800 attendees and the world’s most talented jazz artists—Joshua Redman Trio, Esperanza Spalding, Michel Camilo, James Carter Organ Trio, and Roy Hargrove among the highlights. No one knows for sure how cool jazz or beats of a bygone bebop era will continue to be fused with younger ideas, but this past weekend certainly showed that the genre’s future is in safe hands.

A Week of Inspiration On and Off the Platform: Free Magazines...