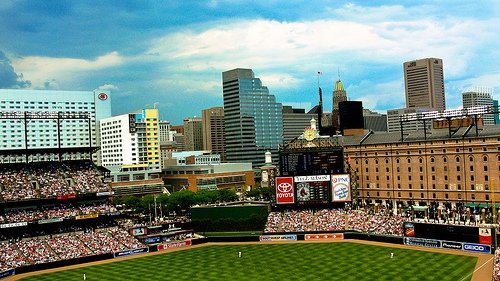 Where: Oriole Park at Camden Yards in Baltimore; Citizens Bank Park in Philadelphia

Why: Okay Yankees and Mets fans, we know you’re tired of paying a fortune for seats in the glitzy new stadiums. It might be time to switch up the playing fields a bit and save some money in the process. (Don’t panic people, we’re not asking you to root for another home team.)

The Yankees play three more games this year from August 31 through September 2 at Oriole Park at Camden Yards. Despite the fact that the Orioles play in one of baseball’s most beautiful parks, their struggles on the field translate into a surplus of vacant seats. Take a couple of days and watch the Yankees romp. Tickets prices range from just $15 to a high of $80 for field box seats. Die-hards should lock in their tickets ahead of time just to be sure local fans don’t snatch up all the good seats. More casual fans might have luck showing up the day of the game and searching out kiosks near the park where the Orioles unload unsold tickets at deep discounts. Last time we went to Camden Yards, $40 box seats on the club level were going for just $20. How can you resist!

The Mets also play three more games this year from September 11 through 13 in Philadelphia’s Citizens Bank Park. Yes, we know the Phillies are last year’s World Series Champions, but they’re just two hours away and the ticket prices will make you smile. . .just $18 to $60. And the Mets could sure use your support.

How to get to Baltimore’s Camden Yards: Both Amtrak and BoltBus stop at Baltimore’s Penn Station, at 1515 N. Charles St. Check schedules and fares at amtrak.com and boltbus.com. The MTA’s light rail and buses both serve Camden Yards, near the Inner Harbor. (Camden Yards, 333 West Camden St., Baltimore, 410.685.9800, baltimore.orioles.com)