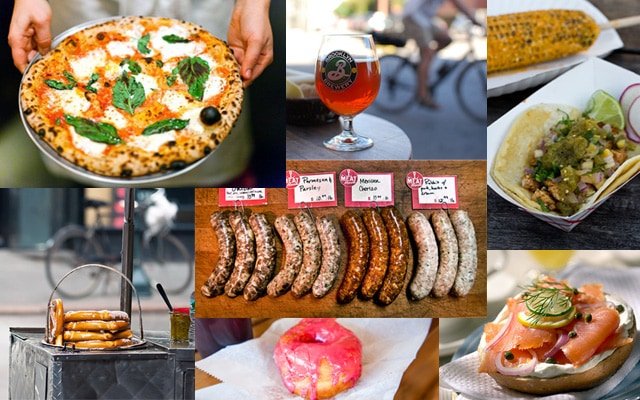 If you are what you eat, then the best way to learn about a city is through its food. Getting acquainted with the world’s greatest food city is no small task. We recommend taking New York one bite, one food crawl at a time.

For starters, follow this path to traditional NY foods made in North Brooklyn. To keep you from biting off more than you can chew (in an afternoon), we limited our walk to a few morsels of Bushwick, Williamsburg and Greenpoint.

NY PRETZELS: Like most classic NY carbs, pretzels hearken back to the Pennsylvania Dutch. Though hard pretzels, whose origin is the subject of many myths (drying for preservation; serendipitous over-baking…), have a solid place in tri-state history, it’s the salt-and-mustard loving doughy guys that scream NYC. Most every soft pretzel you’ll find in the city’s food carts and bodegas are hand-twisted behind the same Moore Street doors. Sadly, the 65 year-old New York Pretzel is not open for factory tours or retail business, but it’s an easy walk-by landmark.

TORTILLAS: In a city of immigrants, once-foreign cuisines become essentials of the local food fabric. For Bushwick, a neighborhood largely populated by Latinos from Puerto Rico and the Dominican Republic and, more recently, Mexicans, this means a whole lot of tortilla. Thanks to five tortilla makers spinning discs of dough in the same vicinity, some refer to the area by the nexus of Bushwick and Flatbush Ave as “Tortilla Triangle.” Right off the Jefferson L stop, Tortilleria Mexicana los Hermanos runs a no frills café where you can enjoy fresh tacos with a view of the tortilla line. Grab a few packs for the road, or shop around the rest of the “triangle” (don’t take the name too literally; it’s closer to a pentagon).

PIZZA: As iconic as Lady Liberty, NY Pizza has been feeding the hungry for roughly a century. With thinnish dough and a crispy-chewy crust, old-school NY style pizza is the big pie you find at most corner pizza shops. Carmine’s Original Pizza makes a praiseworthy NY slice (if you don’t trust us, take it from the expert). For a new-school take on the Italian standby, Roberta’s makes a mean Neopolitan. They’re lovely plain, but best enjoyed with creative toppings–many of which, like their bread and butter, are produced on-site. Back in Greenpoint, Paulie Gee’s calls on Eagle Street Rooftop Farms for much of the produce on his coal-oven pizzas.  For something between, head to Best Pizza (backed in part by team Roberta’s) for NY-style pizza with a hint of wood-fired Neopolitan-Americana.

BEER: Brooklyn’s hops history runs deeper than you might think. The borough was home to 48 breweries at the turn of the century. Take a closer look at the brick mass of 10 Bushwick Place, and you’ll discover a rich liquid history. As NY Shitty elucidates (via NY Food Museum and Brooklyn Daily Eagle), German immigrant Otto Huber, Sr. built his own beer plant to replace the Hoerger Brewery in 1866. Edward Hittleman bought the company in the 1920s, calling it Hittleman Brewery and running an on-site saloon. Over the next thirty years, the brewery’s name changed to Hittleman-Goldenrod Brewery, Edelbrau and finally Edelbrew in 1946. The brewery closed soon after Hittleman’s death in 1951, and was the first home of now Williamsburg-based Brooklyn Brewery. The building will soon find its ninth life as The Wick and the Well, a music venue, lounge and brewery.

(Check out Urban Oyster’s Brewed in Brooklyn tour to explore Old Brewer’s Row and other highlights of Brooklyn’s beer past and present.)

SODA: Across the street from Brooklyn Brewery, its storage warehouse sits in the complex (soon to be a residence) that once housed Dr. Brown’s Soda. Dr. Brown’s fame began with Cel-Ray, a soft drink sold in Jewish delicatessens since 1869. Developed by a doctor for immigrant New York’s children, the Cel-Ray original recipe calls for celery seeds, seltzer and sugar. Another quintessential New York soda, Manhattan Special’s espresso coffee soda has been around since 1895. Now run by the fourth generation of its Italian founders, who see the company as living proof of the American Dream. Walk by on your way up Manhattan Avenue.

DELI & DOGS: Italian specialties have long defined the palate of area’s like Williamsburg’s Graham Avenue. Neighborhood standby Graham Ave Meats and Deli is more than just a butcher; it’s a legendary sandwich shop. Pay tribute to the city’s Italian heritage with a taste of Michael “Mike the Butcher” Virtuoso’s Godfather sandwich: a carefully balanced composition of soppressata, mortadella and provolone. If you’re craving that extra hit of meat, go for Willie’s Italian Special, layered with the sandwich maker’s pick of three meats. Around the corner, Tom Mylan and team break down whole, locally raised animals at the Meat Hook. It may be a far cry from Nathan’s, but the “aggressively spiced” beef and pork Meat Hook Hot Dog should more than sate those dirty water dog cravings. Take it up a notch with the cheese- and housemade chili-stuffed Frankenstuffs.

BREAD: Taste the miracle of New York water in a loaf of Greenpoint bread. Though established in the late 80’s and 90’s, New Warsaw Bakery and Northside Bakery (formerly Old Poland Bakery) celebrate the neighborhood’s Polish heritage with old-world breads, sold at old-school prices. If you’ve ever been down Manhattan Ave. between Driggs and Nassau, chances are you’ve gone weak at the knees from the smells wafting out of New Warsaw Bakery. Walk by the back for a chance to peek at big, crunchy loaves on the conveyor belt (the door is cracked open most evenings). Try your luck at begging for some bread hot off the belt–a life changing experience–or for a safer bet, buy a fresh loaf at one of the adjacent groceries. A few meat market- and bakery-filled blocks away, Northside Bakery makes delicious, natural European bread by hand.

DONUTS: New Yorkers have been eating donuts since they were called olykoeks, and modern Brooklynites have praised their glory since the birth of Peter Pan Donut and Pastry Shop. This cozy Greenpoint standby may have seen several owners and new flavors over its 60+ year life, but the basic method (handcut; handmade) and recipe (secret, of course) haven’t change a bit. Grab a stool by the regulars, and get down with a decadent apple crumb, classic glazed, or harder-to-find classics like cream crumb, cream chocolate sprinkles, and cream coconut. For more delicious donut options in Brooklyn, read oM’s The Best Donuts in NYC.

LOX: Bagels and lox are to the Jewish New Yorker’s diet what the rice and sashimi are to the Japanese. NY’s bagel mecca may lie across the river, but the city’s prolific house of smoked fish lies in Greenpoint. Family owned and operated for four generations, Acme Smoked Fish is one of the country’s foremost sources of nova, lox, herring and hot smoked fish like whitefish, whiting, trout and kippered salmon. Swing by one of Acme’s Fish Fridays to take advantage of wholesale prices on Acme’s goods, including Blue Hill Bay, their preservative-free label. 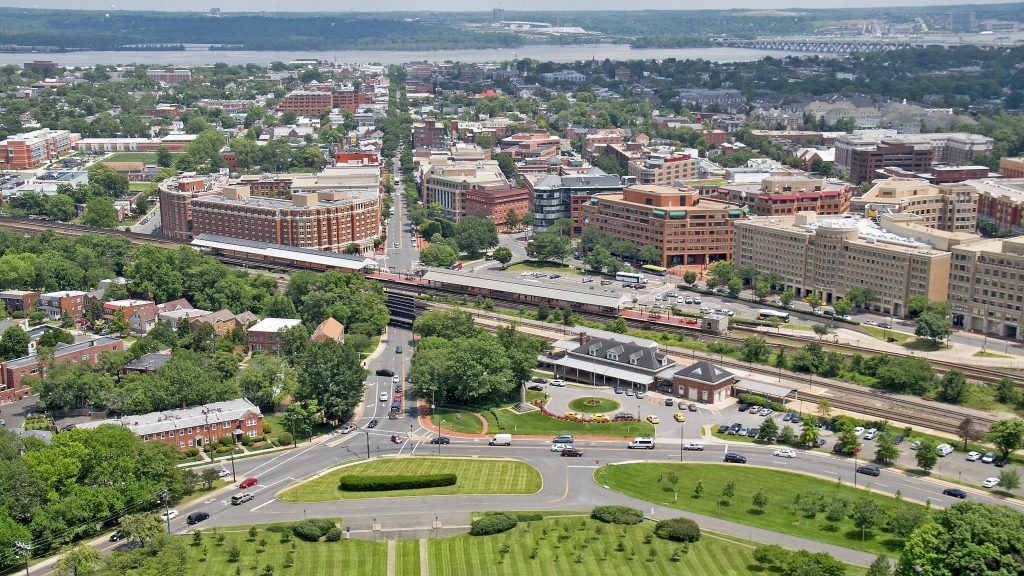 The Best Things to Do in Alexandria, VA