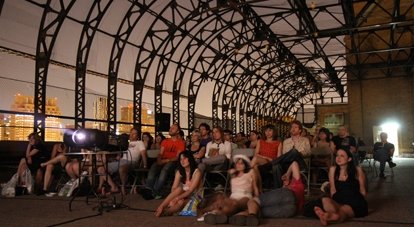 A New York summer doesn’t feel complete without spreading a blanket on a patch of green and watching a film on a wide screen.  Although many open spaces have completed their summer viewing roster, you haven’t missed your chance to share in the communal outdoor movie experience.  Rooftop Films, an underground movie production group started by a Vassar College graduate in the summer of ’97, is still showing a collection of films on rooftops throughout New York until the end of September.

I recently went to see a screening of shorts at the Old American Can Factory, near the Gowanus canal in Brooklyn. For the past four years, it has functioned as a rooftop venue and office location for the nonprofit organization. This particular night’s films were inspired by the industrial landscape surrounding the factory. So, I took in the view: a Con Edison truck yard to the north, a U-Haul center to the south, a few brownstones in the distance and the newly built NoVo condos changing the skyline of 4th avenue. Chatter from the audience turned from inquiring about the shorts to finding an open chair on a roof where aisle-ways began substituting as additional seats. The sun began to set, darkening the temporary theater, as if it were pulling back the curtain to let the program begin.

Minutes after an opening live music act, silence overtook the rooftop and all eyes were on the screen as the small Sanyo projection box broadcast images of the first short; that night the collections would be obscure, yes, but witty, amusing, enlightening at times, and entertaining. Intermittent sounds of passing trains and honking horns were muffled by audience laughs and commentary. Elijah Rosenberg, Rooftop Films Founder and Filmmaker, described the Old American Can Factory as a “Six building complex converted into a haven for artists.” I do love to lay out on the grass for Monday night movies in Bryant Park, but who needs a lawn when you’re in such a relaxing stratosphere with sweeping city views and high altitude breezes that shoo away the humidity and stresses of life?

For upcoming rooftop screenings, visit  . For those who choose to spread out on a patch of green, head to The Yard on Saturday, August 30th, when New York Magazine and KY will present “Looking for Love.” Moviegoers may mingle afterward by an open bar thanks to Brooklyn Oenology.

How to Get There: To the Old American Can Factory, take the F from Manhattan to Carroll Street. Exit at the 2nd Place (south) side of the station. Cross Smith Street and turn left to walk downhill on 3rd Street for 3 blocks (you will cross the Gowanus Canal). You will arrive at a huge corner building whose orange Rooftop signage will confirm you’re there. Cost is $9, $6 in advance for select shows. (Old American Can Factory, 232 Third St., Brooklyn)