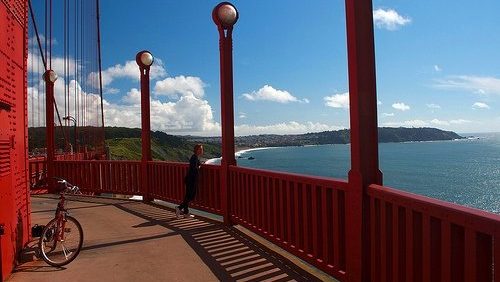 Editors note: we now have a full site dedicated to San Francisco adventures. Check it out here.

Sure, you have to drop a pretty serious carbon footprint to get from New York to San Francisco, but once there, it’s the only American city that matches NYC in terms of accessibility for car-free travelers. In a part of the world where environmentalism is the norm (the garbage trucks pick up compost!) I set out to find San Francisco’s truly green attractions— the hotels that make more than a nod to the eco-movement, the restaurants that view locavorism as a lifestyle, not a trend, and of course, how to travel without resorting to gasoline.

Of course, most of you will probably opt for bikes. Every third tourist seems to be riding a rental from Blazing Saddles, where rates start at $32 a day and include visitor-friendly amenities like handlebar bags and city maps. A cheaper, although slightly more out-of-the-way option, is The Bike Hut. A small kiosk constructed from reclaimed materials and set up at the south end of the Embarcadero (near the Giants’ baseball stadium), this simple shack rents wheels from $22 a day or $6 an hour. (Note that it’s closed Mondays and Tuesdays.) But getting a bike is the easy part; navigating all these out-of-control hills is much more difficult. SFBike.org, a must-see reference for peddlers, has maps that outline just how steep every street is and where the city’s many bike lanes run.

In terms of public transport, the mishmash of options can seem a little overwhelming, but it’s actually fairly easy to get a grip on. MUNI covers almost everywhere you’ll want to go, mostly through a network of buses, but in some cases light rail and historic streetcars. A ride on any of the above is $2—and you can transfer for free from one to the other—just ask for a paper transfer when you board. BART (the subway) is on a different payment system and you’ll likely only use it for jetting in from the airport and taking day trips to Oakland or Berkeley. The slow-moving, overpriced trolleys are for tourists. Pay the $5 fare once, take your photos, and get back on the buses. Bonus: you can always throw your bike on the front rack of any city bus (and on BART trains during non-rush hours).

San Franciscans loooove to talk about how much more natural beauty there is here than in NY. To be honest, it’s hard to argue with them after a ride, run or walk through The Presidio. At the very northern end of the city, this former military base is now a national park offering sandy beaches and spectacular views of the Golden Gate Bridge (and as of this month, a trampoline park!) If you’re ambitious, you can start here and cycle across the bridge. Just keep in mind that it’s a steeper climb on the way back—a smart option is to cycle over, then catch the ferry back.

Golden Gate Park, San Francisco’s take on Central, is confusingly not near the Golden Gate Bridge, but in between the Richmond and Sunset neighborhoods, stretching from the Pacific almost to downtown. You can easily spend a full day here hopping between outdoor attractions like the flower gardens, bocce courts, and buffalo paddocks. Also leave time for the park’s indoor museums—the fine-art-filled de Young as well as the California Academy of Sciences, which reopened two years ago in the world’s largest building to receive LEED’s highest rating. Don’t miss the awesome views from the 200,000-square-foot green rooftop.

There’s one other realm in which SF clearly bests NYC—the edible local bounty. While locavore-ish New Yorkers are currently starting to get nervous about having to dine on squash and potatoes all winter, over here they’re rolling in beautiful fresh produce all year long. The just-opened Bar Agricole in the hip SoMa neighborhood makes good use of said bounty in dishes like stracciatella egg drop soup with heirloom tomatoes, but even more so in cocktails spiked with stone fruit bitters.

I didn’t expect to find pizza to write home about on the Left Coast, but Local Kitchen delivers with some very local pies, cooked to a perfectly crisp thin crust and topped with ingredients like Point Reyes blue cheese, wild mushrooms and spring onions. Their Thursday night wine tasting is a good deal, when $5 nets you four tastes from Napa and Sonoma.

But most locals will tell you the hottest thing going in the restaurant scene is the non-restaurant scene: food trucks. SF Cart Project has an awesome online map that integrates dozens of food trucks’ twitter feeds so that you can track down popular options like Chairman Bao’s Chinese pork belly buns. Or catch them all in one place at Off the Grid, a three-times-weekly roving food truck party.

Of course, serious foodies will also want to venture across the bay to Berkeley’s famous “gourmet ghetto.” You’ll need to call weeks in advance for a table in the main dining room at the original locavore spot, Alice Waters’ Chez Panisse, but you’ll have better luck at their more causal cafe space, where prix fixe dinner start at a very reasonable $29. A newer entry to the always-local-and-seasonal movement in Berkeley is Gather, which offers a half-vegetarian, half-meat menu. They ace both, from spicy beluga lentils over soft polenta to housemade pork and lamb sausage.

San Francisco has no shortage of LEED-certified hotels, but the Orchard Garden Hotel was one of the first in the world when it opened in 2006. It’s also one of the few that is super-serious about being eco-friendly, from big-ticket items like sustainably grown maple wood furniture and a rooftop drainage system that collect and reuses rain water, to small details that I wonder why every hotel can’t have—like recycling bins in all guestrooms and keycard-activated system that automatically shuts off lights and AC when you leave the room.

Taking recycled-chic to a whole ‘nother level is The Good Hotel, where light fixtures are made from recycled water containers and even the fleece bedspreads were once soda bottles. The location is not the best—on the border of revitalized SoMa, but also on the border of the not-yet-revitalized Tenderloin neighborhood. Fortunately, they’ve got free bikes for you to borrow, and hybrid drivers get free parking.

The offMetro Guide to Our Favorite National Parks Without a Car