Home Arts From the CMJ Festival: An Interview with British Band Fanfarlo 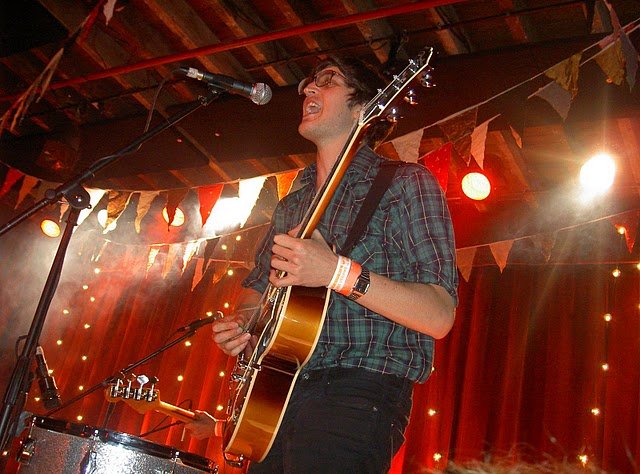 For one more day, CMJ is all the rave in New York with scores of indie bands playing stages and halls throughout the boroughs. It’s a chance for existing fans to share their fave musicians with, perhaps, a new cult following of others. Before this year’s CMJ festival, the British band Fanfarlo finished their first American tour by gracing the borough of Brooklyn, playing previously released singles and songs from their debut album “Reservoir.” On behalf of the group who’s currently reading “The Vagina Monologues” on the tour bus—Cathy Lucas, Leon Beckenham, Simon Balthazar, Justin Finch and Jeremy Warmsley—percussionist and vocalist Amos Menon sat down with oM to answer a few questions on the band name, glockenspiels, and how Fanfarlo’s music should really be defined.

How did you form and come to name yourselves, Fanfarlo?
Fanfarlo was Simon’s recording project from his home in Gothenburg, Sweden. After moving to London and playing early shows with backing tracks, he handpicked the best of his musical friends, who morphed into the band that recorded “Reservoir.”  Fanfarlo is named after the character La Fanfarlo from Charles Baudelaire’s novella La Fanfarlo.

You’ve been labeled as indie pop, do you agree? If not, how would you define your sound?
I agree that there are elements of indie pop to Fanfarlo’s music, but there’s also folk and orchestrated arrangements. It’s hard to categorize the band I play in when I know Justin listens to a lot of black metal and Leon plays classical piano in his spare time. Essentially we’re a mix of chamber-pop folk-disco.

What does Fanfarlo feel it brings to the state of indie music today? Do you hope to break any boundaries in your personal musical mission?
We’re a bunch of ambitious individuals, so after the first single, we wanted to release another and another after that. When the music trickled out there, we became aware that we had more leverage to play alongside bands we liked, play further afield, work with producers we admired, make an album, which we’d wanted to do after two years and four seven inch singles. I hope we can be inspiring and entertaining.

For first timers seeing and hearing you, whether on this tour, or on blogs like “Hooves and the Turf”, what should they know about you as performers and your approach to music?
We’ve got an open-minded approach to music since we’re self taught on nearly all the instruments we use in the band. In rehearsals, we tend to experiment and spend more time on theory than the practical side—it gives us a clear sense of direction. As performers we throw ourselves into a gig, and we work hard on attempting to keep our sets dynamic and interesting for our audience as well as ourselves. 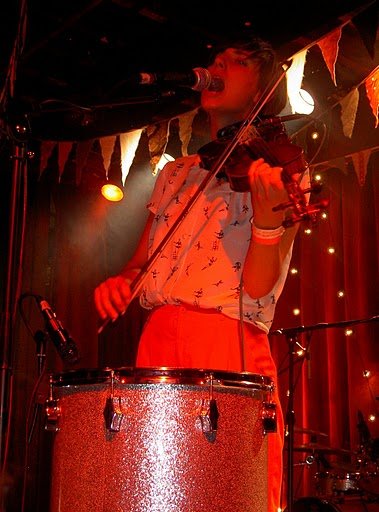 When hearing your music, sometimes oM wants to jump up and down and just flail our hands in the air. Other times we feel like we’re drifting away in a small-sized boat with a couple of friends not knowing where we’re headed. So, how do you account for the variety of sensibility your music brings out in its listeners?
Ah, the subliminal messages are finally working! Ultimately the response to a song is down to the individual. Tempo plays a big part getting people to jump up and down for some of our songs, but we also limit some sections to a few instruments as heard on “Luna” or “Drowning Men.” To me, “I’m A Pilot” has the most dynamics—crunching, stomping intro, pauses at the end of a chorus and a huge crescendo. It’s always fun to play.

Can you talk a little bit about your history with playing melodica, glock and in times past the Fanfarlophone?
The Fanfarlophone was invented by our previous guitarist, Mark, for “I’m A Pilot,” but it’s not used by the group anymore. We’ve used glockenspiels from the start mainly for embellishment, while the melodica is a flexible instrument to have onstage. We currently use it for harmony in “Luna,” mainly in acoustic settings, as it’s a suitable replacement for an electric keyboard part.

What were you looking forward to most about playing in Brooklyn, a great borough for indie music, and at the Bell House, an equally great indie music venue?
Our first American tour exceeded our expectations. We didn’t know what to expect or how people would receive us, as we’d only previously played at SXSW in Austin and one show for CMJ in New York last year. Our schedule was tight, so we didn’t have time to explore Brooklyn, but The Bell House had the best stage out of all the venues we played. It was the perfect size for us.