Established in 1785 as New Brunswick’s capital, Fredericton is currently home to 60,000 people who compose its lively culture and vibrant community. Situated on the banks of eastern Canada’s longest river, the city’s tree-lined streets are filled with restaurants, shops, festivals, history and natural outdoor attractions. The “Cultural Capital of Canada” is also known for its cultural diversity, making it a great place for adventurers and explorers.

From fly fishing for Atlantic Salmon to sampling local craft beers, there is no shortage of things to do in Fredericton.

With a wide variety of restaurants sure to meet all cultural preferences and dietary requirements, it is impossible to go hungry in Fredericton. Naru Japanese Cuisine, located along the main section of Queen Street, is an upscale, yet affordable spot for sushi and ramen. MOCO offers modern Italian fare with some localized Canadian flare.

Try the Sicilian Calamari, which is breaded with chickpea flour and served with an olive-infused tomato sauce. Jonnie Java Roasters is a popular local coffee shop where you can browse for jewelry and international artifacts as the barista prepares your organic beans to order.

Fredericton Boyce Farmers Market, one of Canada’s top 10 community markets, is open early year-round on Saturdays and features over 250 outdoor and indoor vendors.

Where to drink in Fredericton

Fredericton has enough breweries that BrewHopper decided to develop an app with self-guided area brewery tours. Picaroons is Fredericton’s oldest craft brewery, and it has an open-to-the-public taproom —the Picaroons Roundhouse — just steps from the Bill Thorpe Walking Bridge. Graystone Brewing has been open since 2016 and has at least 10 housemade beers on tap at any time.

Belgian beer lovers should head to Grimross Brewing’s tasting room to try one of their many, Belgian-influenced brews such as the Abbey Dubbel or Cheval D’Or. Trailway Brewing is a newer brewery with a wide variety of beers including fruit beers, stouts, and sours.

Like any good city, you don’t have to love beer to enjoy it. Maybee Brew regularly has on-site events, which have included Hopped Yoga, Paint and Sips and a summer pig roast. Other well-established beer-related spots in the area include Mama’s Brew Pub, The Ciderhouse, York County Cider, and The Joyce Pub.

The Devil’s Keep Distillery is Fredericton’s first craft distillery. While they currently only produce vodka, they have plans to begin adding gin and whiskey to their lineup.

The Lunar Rogue Pub, named after New Brunswick’s most celebrated rogue Henry More Smith, opened in 1989 and is currently home to 738 whiskeys. Co-owner Frank Scott was notably honored in Scotland as a Keeper of the Quaich in 2015 — an honor which “recognizes those that have shown outstanding commitment to the scotch whisky industry.” If the rumors are true, Scott was the first non-Scottish recipient of this honor. And for those curious about the 738 whiskeys offered, The Lunar Rogue Pub lists them on an app called “The Rogue’s Whiskey.”

Unlike many cities, Fredericton does not currently have Uber, Lyft or other ride-sharing services at its disposal. However, it is an excellent city to navigate by bike, which can easily be rented in town at Savage’s Bicycle Center or The Radical Edge. Savage’s has been in business since 1897, making it Canada’s oldest bike shop.

If you’d rather not turn to two-wheeled adventure, don’t worry — the city is also extremely walkable. Even at a slow and unrushed pace, the aforementioned Bill Thorpe Walking Bridge — which is also cyclist-friendly — can be walked in under 10 minutes.

The bridge, which connects Fredericton’s north and south sides, is part of more than 71 miles of multi-use trails along the Saint John River. Over 13 miles of these trails are paved and fully accessible to pedestrians, cyclists and wheelchair-users alike. There are 10 major trails in all, and all of them are open year-round.

The Arts in Fredericton

People seeking arts and entertainment can start at the Fredericton Playhouse. The 709-seat venue hosts musical, theatrical and comedic performances. The Capital Complex is a multi-room venue with events almost every night, ranging from open mic nights with local performers to established headliners.

The UNB Art Centre, located on the University of New Brunswick campus, is a great spot for visual exhibitions. If fine art is what you’re in search of, The Beaverbrook Art Gallery, which opened in 1959, has a permanent collection that includes works from Salvador Dalí.

Fredericton is no stranger to music, either. Tony’s Music Box is a Fredericton staple for purchasing musical instruments and related accessories, while Backstreet Records is the place to go for vintage vinyl records.

If you’re looking to spend some time indoors, check out Unplugged — a popular “board games cafe” where you can buy and play their  games on-site. Strange Adventures and The Comic Hunter are two local spots to check out comic books and related collectibles.

No matter the weather, Fredericton always seems to have a festival going on. The Fredericton Craft Beer Festival runs every March and spotlighting brewers from all over Canada’s East Coast. The Fredericton Wine & Cider Festival, which takes place in April, features the largest offering of both local and international wines and ciders.

The FrexRod Car Show comes to town in May, as does the Fredericton Marathon. June will bring RibFest, the Cultural Expressions Festivals, and the FeelsGood Follyfest.

The city has hosted the Harvest Jazz & Blues Festival since 1991, in which over 400 artists perform a number of venues over the course of six days. There are a handful of other music events to choose from as well, such as the the Nashwaak Music Fest and the NB Summer Music Festival, which are enjoyed by both locals and visitors alike.

You can find great deals on Kayak, just click below:

Currently, there are no direct flights from New York to Fredericton. Many flights require at least one layover. For the cheapest option, you may have the best luck flying out of Newark. Check the Fredericton Transit site for bus schedules and maps.

If you decide to rent a car, you can find good deals here: And if you decide to take a flight – click here for the best offers. 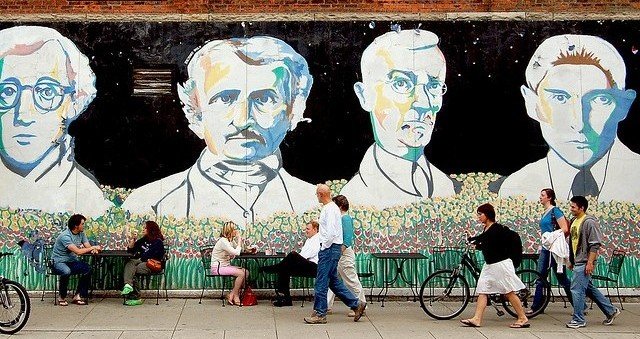 oM Way Off: The Best Things to Do in Ann Arbor