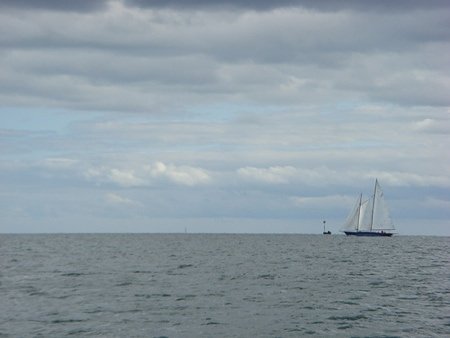 That is what the senior Democratic Senator from Massachusetts would have wanted. Health care reform was his life’s work, something he fought for since the 1960s.

Likely, he would have also wanted friends to visit the same coastal getaway his prominent clan enjoyed for so many years. Known as Teddy to supporters, colleagues, friends, family, and every person from Massachusetts, he divided his time between his family’s famed compound in Hyannis Port and Capitol Hill. There are few better ways to say a proper goodbye to both summer and Teddy Kennedy than a weekend trip to Hyannis Port.

Here is a look back at the vibrant, meaningful life and times of Senator Kennedy, the agent for change, and Teddy, the sailor from Mass. (Note: The suggested spots in this piece come from one part research, one part Bostonian/Cape Codder knowledge, and all parts affection for Senator Kennedy.)

Channel the Kennedy Compound in your own captain’s quarters at the three-diamond Anchor-In hotel with a heated pool, sun decks, and beautiful views.For a more intimate experience, rich in history, stay at the Marston Family B&B circa 1786. It’s owned and run by a real sea captain and his wife, and has a welcoming Cape Cod ambience and décor (you can even bring your dogs). Each guest also gets a trip on their 34-foot sailboat for free, so you can sail the open seas where Teddy’s legacy lives on.

Teddy was also a long-time resident of Hyannis Port in Barnstable, Massachusetts in Cape Cod, where he sailed any chance he got. Ted Kennedy loved to sail. His beloved Mya can still be seen moored in Nantucket Sound. Following September 11th, 2001 the Senator called every family from Massachusetts that had lost someone in the tragedy and worked to help them as much as he could. Three years later, he called one of the widows from Foxboro, Massachusetts and invited her and her two young boys to go sailing with him in Nantucket Sound. Take a sail of your own with Catboats Rides in Hyannis Port, open through October 12. Or, take a Hyannis Port Harbor Cruise on the Hi-Line ferry which will take you right by the Kennedy Compound from the water.

The morning following his passing, we heard things all across the media about Teddy’s life as the strong son in the country’s royal political family and as patriarch of the senate.He was “a colleague, counselor, and a friend,” said President Obama yesterday morning. “The outpouring of love, gratitude and fond memories to which we have all borne witness is a testament to the way this singular figure in American history touched so many lives. His ideas and ideals are stamped on scores of laws and reflected in millions of lives.” Senator Kerry said, “He taught us how to fight, how to laugh, how to treat each other, and how to turn idealism into action, and in these last fourteen months, he taught us much more about how to live life, sailing into the wind one last time.”

Savor the tastes of summer as the Senator did each year. Sure, Teddy could be a little hot under the collar on the Senate Floor debating causes that were important to his constituents, but when he left Washington to go back home, there was nothing like an ice cream cone to cool him down.

Pay your respects to the most effective lawmaker in American history by visiting a memorial dedicated to the entire Kennedy family at the John F. Kennedy Hyannis Museum. “The sea and shores of Hyannis Port [that] inspired our 35th President like no other place on earth.”

The museum is just a 10-minute walk from the Hyannis Transportation Center (the bus station). The multimedia photography exhibit is a poignant retrospective to the president’s life spent with his brothers and family on Cape Cod. The photos’ glimpse of the family’s life ‘down the Cape’ is unlike anything else done on the Kennedy’s.

Take a stroll on the beach as Teddy would often do with his Portuguese Water Dogs Sunny, Splash, and Cappy. Hyannis Port Beach is a popular section of coastline protected by Cape Cod National Seashore, which means its beauty and cleanliness knows no end. Pick-up a map of the area and beaches at the Hyannis Chamber of Commerce or at CapeCodTravel.com. In Barnstable, Craigville Beach is the largest on the Cape.

While flowers on Marchant Avenue at the entrance of the Kennedy Compound would look beautiful amidst the backdrop of Hyannis Port’s seaside cottages and white picket fences, helping achieve universal health care for Americans would make Teddy Kennedy smile from above.

How to get there: Several Amtrak trains depart New York’s Pennsylvania Station in the morning and early afternoon, and reach Providence, RI in time for you to transfer to a Peter Pan/Bonanza Bus from Providence to Hyannis MA on Cape Cod. The voyage should roughly take from 4 to 6 hours. Visit the Amtrak and Peter Pan Bus sites for specific schedules, or New England Travel Planner for more details about the area and how to get around without a car.