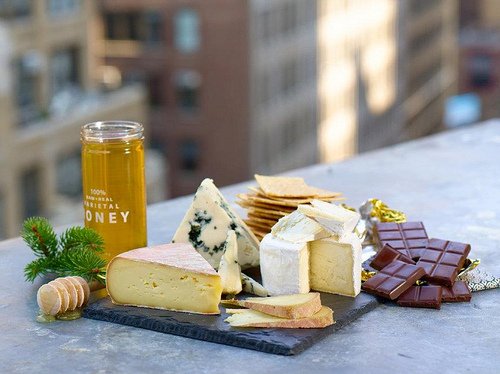 All of the above work well on a cheese board (see below for cheese plating tips), and Brooklyn native Suzy Konecky says the Tobasi, a grassy, semi-soft raw cow’s milk cheese aged 3-4 months, “melts beautifully for cooking and makes a divine cream sauce.” Konecky’s always experimenting with new varieties, like a double cream Bloomy Rind cheese and rustic hard grating cheese.

A Fromager Shows How to Make a Fabulous Cheese Plate

A crew of dairyheads recently joined forces for “How to Milk It,” a night of cheese and butter at the Brooklyn Brewery. Fromager Tia Keenan got the crowd’s entertaining minds churning with tips on preparing the ultimate cheese plate. With wistful expertise, Keenan advised, “Eating should be like a dream, familiar and unfamiliar at the same time.” Here are her recommendations for making that dream happen on your cheese plate:

1) Infuse your plate with contrast in the cheeses’ taste, texture and appearance
2) Always include something mild, simple and clean, like a soft, fresh ricotta or chèvre.
3) Incorporate another relatively mild cheese that’s lightly aged but with a bit more flavor, like a slightly acidic goat’s milk cheese.
4) Have a couple of “middle of the road” options between the subtle and the stinky. In her sample slate, Keenan included one toothier, firmer cooked, pressed cheese (cooked, pressed cheeses – like Parmigiano-Reggiano – have their curds heated before being pressed) and another washed in brine.
5) Include a funkier option for bold palates, like a complex, veiny blue.

1) Don’t underestimate the importance, and potential, of the foods your cheese is macking it with. Buck the run-of-the-mill fruit and nut mix and experiment with unconventional pairings (like toasted nori). Keenan chose a 75% dark chocolate (never milk!) for a fresh, young blue cheese.
2) Bring contrast to your condiments through a mix of sugar, acid and heat and variety of textures. Keenan’s sample plate featured strawberry jam (for sugar), curried mustard (for acidity) a spicy olive oil (for heat) and a nut brittle (for crunch and sugar).
3) There are a few ways to draw out the flavor of a cheese through its accompaniments. You can: mimic or contrast the cheese’s flavor, focus on pleasant texture couplings or pair based on a food the cheese tastes like (e.g. pairing a nutty cheese reminiscent of almond butter with fruit preserves).