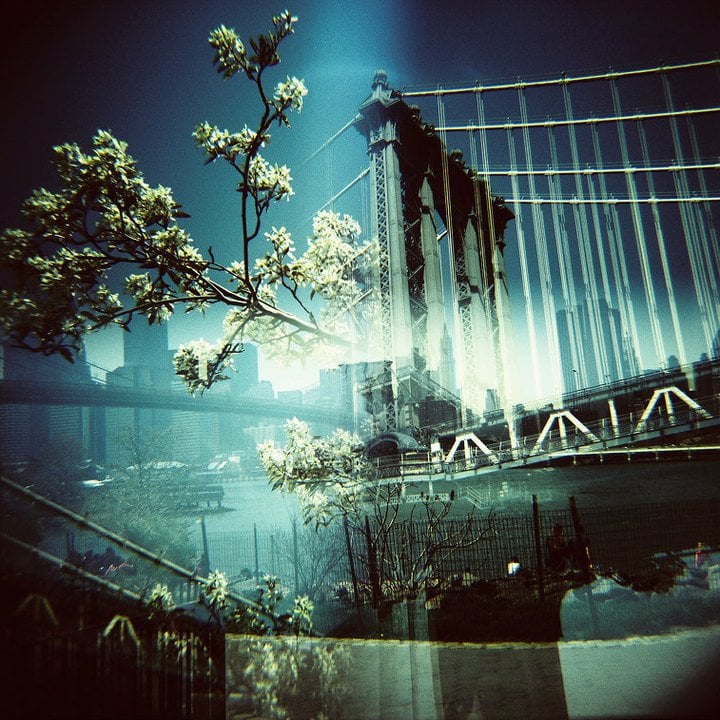 Roughly twenty passengers aboard the bright yellow school bus raise their hand, and one-by-one our patient chaperon assists them. So began a photogenic fieldtrip to a secret location where we’d snap pictures with loaned Lomography cameras. Hosted by the Lomography NYC Gallery Shop, the workshop gives you an opportunity to experiment with a Lomography camera of your choice—from Diana Minis to Spinner 360s to Lubitel 166s.

If all that sounds like a foreign language, you’re not alone. Before the Lomography guide explained the options, I was in the same boat. (Or bus?) Each type of toy-like camera is amazingly simple, and yields variations of the charming retro prints characteristic of Lomography analogue photography—think hazy, over-exposed images with vibrant, saturated colors.

The bus departed from the Lomography Shop in Greenwich Village, and as it crossed the Brooklyn Bridge we all smiled in curious anticipation. “I bet they’re taking us to Red Hook,” said the bohemian young woman I’d chosen to sit next to. But as we drove past the shipping docks and watched the Statue of Liberty fade into a speck, we realized we weren’t quite there yet. 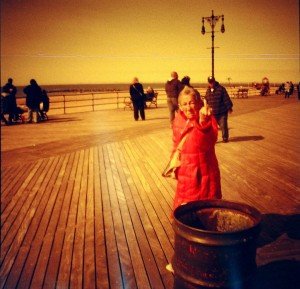 Forty-five minutes and eight suppressed urges to sing, “Who Stole the Cookies from the Cookie Jar” later, I shouted “Coney Island!” as The Cyclone roller coaster came into sight. The bus driver pulled over, cut the engine, and we disembarked to begin the three-hour snap-fest.

With the Lomography motto, “Don’t think, just shoot” in mind, I took pictures of anything of interest on the boardwalk that exceptionally sunny day: a little girl dressed like a mermaid; a white-haired man looking in horror as he read the newspaper; a wrinkly woman gazing at the ocean who gave this photographer the bird when she realized she was my subject. By the end of the session, I’d gone through two rolls of film and taken over 60 pictures.

The group reconvened at the boardwalk bar chosen as the designated end-point by our Lomography guides, where they treated us all to a celebratory shot of vodka. I ran to Nathan’s for a quick hot dog before boarding the bus back to the Greenwich Village Lomography shop where we returned the cameras and submitted our film rolls to be developed.

It was a picture-perfect way to spend a Saturday–a thrilling, mysterious journey followed by hours of learning a creative new skill and ending with a hot dog. There are two more fieldtrips to two more mysterious off-Manhattan destinations planned in May, and you’d be wise to sign up before the seats are snapped up.

Stop by the LomographyNYC Gallery Store to purchase tickets for the next (top secret) trip. The $20 admission fee includes transportation, camera rental, and film. Learn more at lomography.com and follow the company on twitter @lomographynyc for tour updates.

Photos in order: Courtesy of Lomography and the author