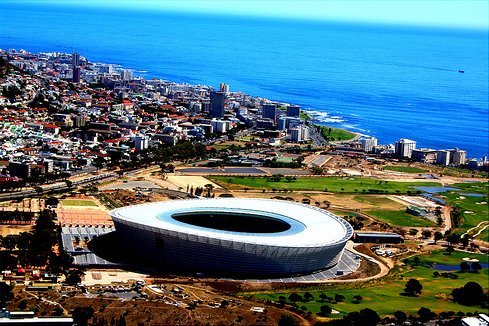 Every four years, the top 32 soccer teams gather for a month-long tournament in select cities throughout a host country. Whether you’re digging your soccer shoes into the turf every weekend as you play with your team or you’re just a die-hard fan, the World Cup is a must-watch event for many. It’s the most widely-viewed sporting event in the world; at the 2006 World Cup final in Germany, an estimated 603 million people watched as Italy edged past France on penalties in a tense match that included the startling, incongruous head-butt by France’s then captain, Zinedine Zidane. After his ejection, Zizou trudged stoically past the trophy and into retirement, leaving his indelible, if unusual, mark on the tournament.

This year’s finals in South Africa, the first ever on the African continent, will see familiar stars and fresh talent looking to record their own places in history. If you can’t make it to Durban, Johannesburg or Cape Town to watch the games, you can still find plenty of spirit in the New York area—although you’ll want to scout out a regular seat beforehand to watch as the excitement unfolds. Each of the following six places to watch the World Cup in and around NYC will be a tournament-ready venue from June 11 through the final on July 11, so grab that jersey, learn the songs and join in the party.

Cypress Avenue | 52 fifth Avenue
Residents, passing cyclists and German tourists meandered into this Park Slope pub on a recent Saturday to watch Inter Milan outclass Bayern Munich and lift its first European Champions trophy for 45 years. Patrons munched on curry chips and sampled from a modest selection of draft beer, including the staples (Guinness, Smithwicks, Stella) and some interesting selections (Sierra Nevada Summerfest), while watching the action unfold on televisions mounted behind the bar and above an alcove—where visitors will no doubt notice several hay bails and a fireplace, which form a cozy seating area. The fireplace will likely go unused, but a generous amount of outdoor seating will surely benefit the crowds once the games begin. And if you feel like relocating, head next door (literally) to the Black Sheep Pub, which boasts a large projector screen and fooseball table.
How to get there: Take the 2, 3 train to Bergen St. or the B, Q to 7th Ave.

Madiba Restaurant | 195 Dekalb Avenue | madibarestaurant.com
Opened in 1999, Madiba offers authentic South African cuisine (supplemented by a rooftop garden at their Fort Greene location) in a space influenced by the Shebeen tradition. Historically known as meeting halls for socializing, spirits and discussion in South African townships, Shebeens remain important cultural locales today. Shelves of artifacts, including tributes to Nelson Mandela, common South African market goods and a rugby ball, line the wall to the right of the entrance, where the kitchen is also visible beside an elegant, curved bar. The festive atmosphere at Madiba will truly erupt as soon as the Bafana Bafana kicks off against Mexico in Johannesburg on June 11, with drink specials, bobotie burritos and boerewors, and much more. But the fun extends beyond its doors for June and July, too, as the restaurant hosts its own soccer matches in Fort Greene Park.
How to get there: Take the B,Q,M,R to Dekalb Ave., the 2,3,4,5 to Nevins St., the C to Lafayette Ave., or the G to Fulton St.

Iona | 180 Grand Street | ionabrooklyn.com
The “Sports” link on Iona’s website directs you to a complete listing of World Cup 2010 matches. This bodes well for prospective soccer viewers, and it should therefore come as no surprise that residents routinely pack this Williamsburg enclave for European league and cup games. Expect more of the same come June 11. Space is somewhat tight, which will, depending on your tastes, either enhance or diminish the joy of watching your team play, but it’s hard to argue with Iona’s genuine feel—its unobtrusive lighting, wooden benches, and menu, scribbled in chalk, behind the mahogany bar. If your team is on, it may be a good idea to come a little on the early side and stake out a place in front of the intelligently-spaced televisions—that is, after you’ve chosen from a fine selection of 21 beers on tap and over 40 imported bottles that are sure to satisfy even the pickiest fan.
How to get there: Take the L to Bedford Ave.

Berry Park | 4 Berry Street at North 14th | berryparkbk.com
Enjoy the summer sun at one of the tables on Berry Park’s spacious rooftop, and then remember why you dug that heavy nylon jersey out of the closet in the first place. Retreat to the cavernous main hall, where the drama plays out on a giant projection wall. It’s a superlative space for watching soccer, with plenty of seats and, if necessary, ample standing room. And Berry Park also seems to attract the dedicated fans—those who know the sport well and care about the action unfolding onscreen. For a recent United States game against the Czech Republic, patrons sat together at long wooden tables and drank mugs of Radeberger, cheering every pass and bemoaning each missed opportunity. A looming soccer ball illustration on the wall affirms Berry Park’s allegiance to the world’s game, while a large chalkboard behind the bar assures viewers that all games will be broadcast live.
How to get there: Take the L to Bedford Ave. or the G to Nassau Ave.

Studio Square | 35-33 36th Street, Long Island City | studiosquarenyc.com
Missed out on that trip to Germany for the World Cup in 2006? Yearning for some fresh air and a unique biergarten feel for this year’s action? Head to Studio Square when the US kicks off against England at 2:30 (EST) on June 12, and you’ll be able to snack on German Bratwurst, pulled pork sandwiches and other hearty fair while deciding between a liter or pitcher of Pilsner Urquell. Long, communal tables will offer you the chance to get acquainted with a fellow fan, or, perhaps, a rival. Studio Square remains open long after the last of the day’s games conclude (and nearly until the next rounds begin), so you’ll have no problem whiling away the evening in this open-air giant.
How to get there: Take the N,W to 36th Ave., or the R,V to 36th St.; Steinway St.

Mulligan’s | 159 First Street | mulligansonfirst.com
Mulligan’s, a soccer shrine, sits directly next door to Premier Soccer Shop (www.premsoccershop.com), the “#2 best soccer store in America.” No trouble finding that jersey, then. The dark brick walls and low ceiling, draped with Guinness paraphernalia, initially give Mulligan’s an intimate feel, although it’s actually quite spacious. There’s plenty of seating at the bar, and a well-lit billiards room and private party space as well. And if you’re caught standing, you’ll never be out of viewing range, as TV screens adorn every wall, competing for space with a multitude of flags, scarves and signed jerseys. It’s a sports bar, to be sure, but its allegiance, its focus, lies with football of the European variety, showcasing everything from Champions League finals to third division English League action.
How to get there: Take the PATH train to Hoboken 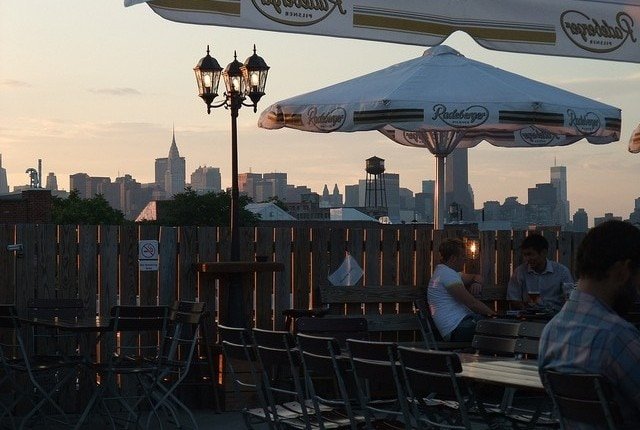 The Five Best Beer Gardens in NYC and Beyond