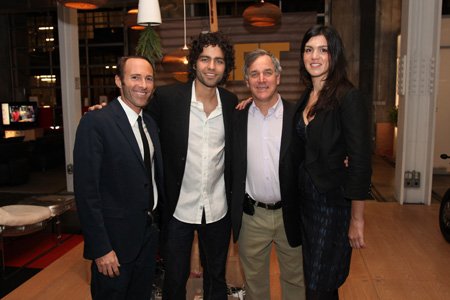 As President Obama takes off tonight for the United Nations Climate Change Conference in Copenhagen, we turn our attention to the environmental efforts underway in New York City this week. On Tuesday evening, downtown at the Wired Holiday Pop-Up store, we celebrated the launch of SHFT, a website pedaling green products like $2,200 folding bikes, $90 recycled cassette tape ties, and $40 woolen wine racks. And so, as we follow discouraging news out of Denmark and reports that there will need to be “seismic shifts to really close a deal” we have found some reassurance in Adrian Grenier’s latest project. Along with producer Peter Glatzer and founding partner Stonyfield Farm’s Gary Hirshberg, the star of Entourage has developed a refined, down to earth vehicle through which people can easily “shift their lifestyle, shift outlooks” for the good of the planet.


“SHFT.com is where taste and ethics converge,” said Grenier, standing between tables filled with high-tech toys. “It’s an alternative media for alternative thinking people. Peter and I have been talking about this for a couple years actually . . . the idea came from our feeling that there isn’t a resource for the things we like. We wanted to do something that was a bit cooler and a bit more limited in scope.”

While SHFT may just be yet another eco site sprouting up at a time when promoting the environment is the trendy, noble (and somewhat profitable) thing to do, the spokespeople at the launch party seemed to rally around a fresher sense of purpose. When asked how he would define the success of his latest venture, Grenier said, “As long as it doesn’t become a dumping ground for just anything and everything green.” When Grenier isn’t an actor playing an actor on HBO, the scruffy, mop-headed guy spends his time in the outer borough of Brooklyn, where he volunteers for the Park Slope Food Co-Op, bikes in Prospect Park with his buddies, and drums in his band, The Honey Brothers. (Oh, and he wears “green” underwear, naturally.)

As guests sipped organic vodka cocktails and nibbled on ruby beet parfait, Hirshberg spoke about the market-driven solutions needed to impact climate change. At moments nostalgic about milking cows in 1983—at the start of his now $300 million business—he stressed SHFT’s role in simply helping to create a more sustainable society by giving people the tools and options that will enable them to be eco-friendly.

Referencing Mahatma Gandi, “If you think you’re too small to be effective, you have never been in bed with a mosquito,” Hirshberg urged the crowd not to get negative about the slow progress in Copenhagen. “It’s not about what’s going on in the building, but what’s happening outside in the streets that is exciting.”  While the 100 attendees did not line up at the cashier, recycled “Go Green” goods in hand (which raises the bigger issue of how the economy may impede great ideas like SHFT), the consensus seemed to be that the website was cool, interesting, and innovative. “The message will resonate with people in New York City and around the country,” one guest assured us. “The site is saying you don’t have to be a super ‘green’ hero in order to lighten your carbon footprint in a significant way.”

And you didn’t hear it from us, but if you ever to want to meet Grenier, head to Habana Outpost in Brooklyn this April. Apparently, the place runs on solar panels, has a chill outdoor space, and allows folks to blend their own margaritas by riding a bike. “Come spring time, I’ll be there.” So will we, Adrian, so will we.

The SHFT pop-up is open through December 27. The Wired Holiday Store is located at 415 West 13th Street, New York.

A Halloween Party in Brooklyn With a Killer Music Lineup