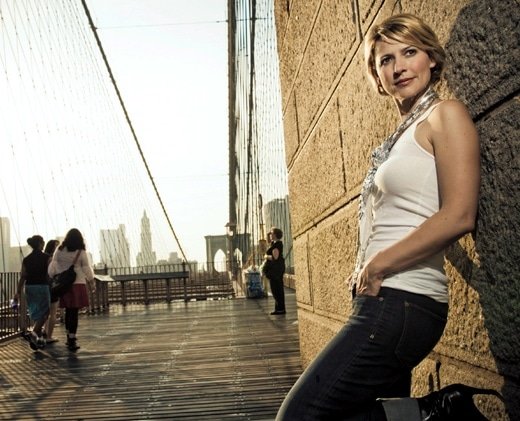 She bikes, she lives in Brooklyn, and her roller derby name is Green Eggs and Slam. In 2010, Samantha Brown celebrates 10 years as a host on the Travel Channel. And no, she’s not leaving the best gig in the world anytime soon. (Trust us, we asked—twice.)

From home base in Park Slope, the star of Great Weekends spoke candidly with us on the phone about her time off camera, what’s planned for the big anniversary, and where we should head for our next weekend getaway near New York City.

oM: We recently started following you on Twitter. What is the most remote place you’ve ever Tweeted?
SB: I Tweeted in Vietnam, in Ha Long Bay. Beautiful place on the ocean populated by 3,000 people. There are these striking limestone cliffs, like something out of a movie, maybe Lord of the Rings. I was just waiting for the dragons to appear.

oM: Sounds like you just answered our second question; Where was the last place you felt truly inspired by your surroundings?
SB: Same place. Something I never knew that existed. You felt you had been transported to a fantasy land where sorcerers lived. We’re usually very focused when we’re filming, but all of us, even Will the camera man, had to pause to take it in. Really the most beautiful place you’ve ever seen. It’s a floating fishing village, people live on the water, children go to school on the water. There are about 200 communities, all protected by the limestone cliffs.

oM: Bringing things a little closer to our shores, where would you recommend visiting next weekend without a car?
SB: Asbury Park in New Jersey is awesome. Take the New Jersey Transit from Penn Station two hours to the town. It’s like having Austin in our own backyard; it’s very laid back and was made famous by Bruce Springsteen’s “Greetings From Asbury Park, NJ” album and Bon Jovi’s “Stone Pony.” The place is a reminder of when we used to stay up past ten o’clock, go listen to rock and roll with our tight jeans, and feathered aqua net-sprayed hair. Wonder Bar has got a great vibe. It’s also a great historical preservation community, lots of storied buildings—the town was founded in the 1800s and has a fun, old boardwalk, so it’s like stepping back in time—and it’s also got great restaurants. The Langosta Lounge has wonderful Tex Mex Asian fusion. Asbury Park also has its own roller derby team; I gave it a whirl in fishnet stockings and discovered my signature move—which gave me my handle “Green Eggs and Slam”—I had bruises for four months. That episode should air sometime in March.

oM: We will be tuning in for that. So in the third season, how will the Travel Channel celebrate your 10th anniversary?
SB: We’ll be doing a big show at Disney World along with a Fanathon, where fans will get to vote for their favorite most embarrassing moments and their perspective on the different travels. It will be a big trip down memory lane. We’re also doing “Inside the Suitcase,” which will have all the juicy behind-the-camera details like when things went wrong. It’ll be an inside look at the greatest job in the world. I believe that will air in February.

oM: You’ve been a New Yorker for over 10 years. When you’re not globe trotting, what are some ways you enjoy your weekends in the outer boroughs?
SB: Though I’m hardly here [Brooklyn], I like to stay more around the Park Slope area. There are two wonderful greenmarkets near Prospect Park, where I spend a lot of time riding my bike. I think people are happiest on their bicycle, don’t’ you think? I used to live on the Upper West Side near Central Park, which is very manicured. I love that Brooklyn has let Prospect Park go natural. You’re heading in to the woods, and it’s the city’s largest forest. I also like to shop at a place called Matter in Park Slope. It has fun, artistic takes on everyday items: a salad bowl that was made by melting green army men. You can find great gifts ideas for when you just don’t know what to buy a person.

oM: When offManhattan met you at the New York Food & Wine Festival last fall, you said you were waiting tables before you were a Travel Channel host. Any thoughts on what you might want to do after this job?
SB: I’ve found in my travels that it’s not about seeing places, but about meeting people, connecting with people. I would love to do a show just talking to everyday people, maybe something similar to Charlie Rose or Leonard Lopate. Just sit down and spend quality time with people. I’d also like to visit more difficult countries. Go to the Middle East and focus on understanding each other, and really how all alike we are. Specifically Afghanistan, I would love to find out more about the culture. All we hear is negative. I wish we weren’t so scared of things we don’t know and open our eyes more. In the show we recently filmed in Vietnam, we explore the complicated history; we don’t candy coat it. We ask questions about the awful moments, and celebrate the country for what it is today. We strive always to see things in a positive light.

To keep up with Samantha as she tours the world, visit travelchannel.com.