Home Best Of The Best Korean Barbecue in NYC 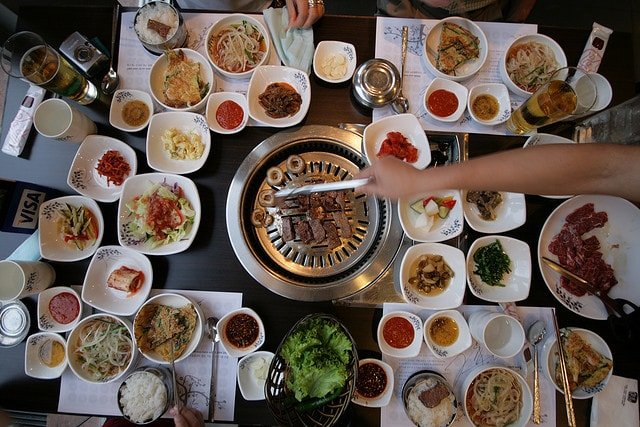 Update: This restaurant has now closed.

When it comes to Korean barbecue, Manhattan’s got nothing on Queens. Most Koreans live in Queens, specifically Flushing, where they go to church, sing Karaoke, and most importantly, eat. It’s only logical that the best Korean BBQ in town is here.

Although most of us love an urban adventure, especially one ending in an eatable reward, Nam-O-Jong, located at the corner of 161st Street and Northern Boulevard, is one of those places you really wish delivered closer to home. For about $30, the BBQ ribs are cooked on your table with a combination of natural gas and coal, which adds a slightly smoky flavor to the sweetly marinated beef.

The proper way to feast on Korean barbecue is to wrap meat, red paste, grilled garlic, and the scallion side dish on a lettuce leaf. Consume this all in one bite. These ingredients are generally included, along with several refillable side dishes that cover the table. The restaurant also serves complimentary egg soufflé and kimchi soup for those who have barbecue.

The drink selection is appropriate but limited. For liquor drinkers, soju and baekseju are available for about $10 a bottle, and are the traditional drink-of-choice in Korea. Korean beers are available, but unlike Western beers, they have body, flavor, and are less carbonated. (Budweiser and Bud Light are also available.)

The lunch menu is cheaper but mediocre. For $15.99 you will get about half a serving of kitchen-cooked meat and a bowl of ice-cold noodles. In Korean restaurants, kitchen-cooked barbecue can mean it is pre-cooked, less fresh and most likely a lesser quality meat cut. That tastes true at this restaurant. There is nothing wrong with the ice-cold noodle soup, cucumber and radish pieces floating in the beef broth, but it somehow seems wrong not following large amounts of freshly-cooked barbecue.

Nam-O-Jong is well lit, familial, and sure to leave coal and cooked meat smells on your clothes and in your hair for days—the price you pay for the full Korean experience. Head next door for drinks and Hollywood Karaoke for $35/hour. That’s the way Koreans do it and that’s how it’s done in Flushing.

How to get there: Take the 7 to Flushing–Main Street, then transfer to the Q13 towards Ft. Totten at 39th Avenue between 138th Street and Union Street. By LIRR: take the Long Island Railroad to Port Washington and get off at Broadway, then walk a couple blocks east to 161st Street and Northern Boulevard. (Nam-O-Jong, 160-13 Northern Blvd, Queens, 718.539.5674)