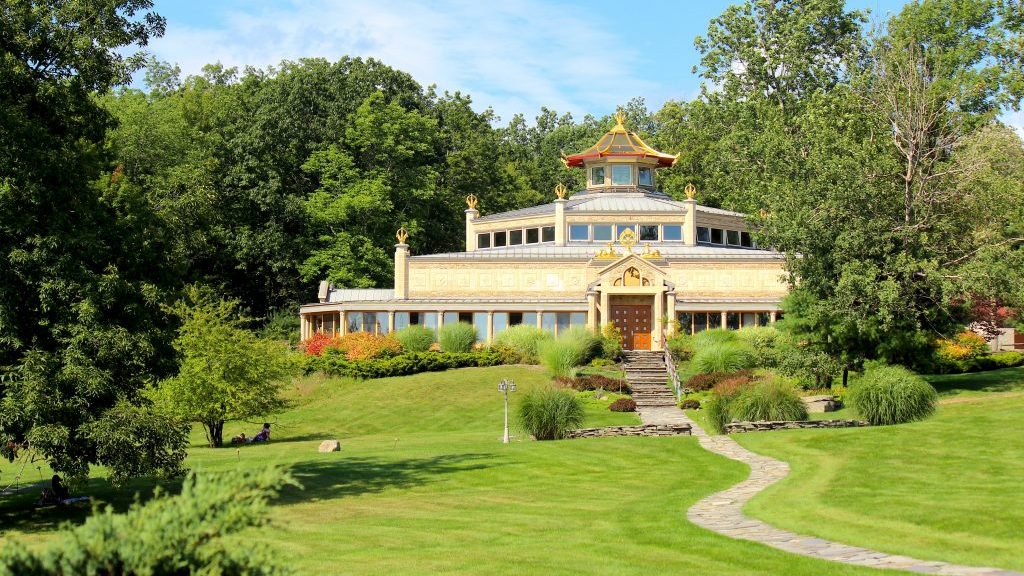 I had broken up with my boyfriend and lost my job within a two week span, so when I realized I had a meditation retreat rapidly approaching, I was more than a little concerned about being alone in nature with my thoughts. But as our train whisked us past the factories and grit of the city and into emerald green tiny towns, I began to come around to the idea. Healthy meals and a group of people who were hoping to find some peace of mind could do wonders for me. Plus, I had my best friend joining me, and she had snacks.

At the Kadampa Meditation Center in the Catskills, you can lean into soul-searching as much or as little as you’d like. The Kadampa Buddhist tradition is a global religious movement, founded by Kelsang Gyatsu in 1991. Your retreat will either be a weekend to explore the teachings of this particular practice, or a quiet, simple couple of days communing with the wilderness around other quiet-seekers. My retreat was called “Letting Go of The Past”, ironically fitting for my situation, featuring a series of lectures from visiting teacher Kadam Peter Kurczynski.

Once arriving in Port Jervis, we were scooped up and driven to the meditation center in nearby Glen Spey, on a winding, breathtaking road, apparently often used for car commercials since it looks so cruise-able. But if you’re not a VIP journalist, a taxi from the train will run you about $25. 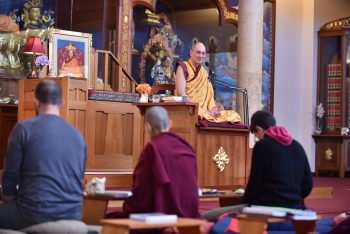 We got to the center later than most, and were shepherded straight from the car to the temple, which was a bit jarring, but we were pleased when we saw that instead of getting down on the floor in lotus position, there were some nice, padded chairs set up in rows for us to perch on. We plopped down on the plush, red cushioned seats and listened to a general introduction to the teacher and an overview of the goals for the retreat. I’ve always thought the aim of meditation was to clear your head of all thoughts, something that proves especially difficult when you have a lot of serious stuff going on, so I was happy to hear that this teaching was focused not on emptying the mind, but instead, beginning to think differently through the use of repeated, encouraging mantras.

After the session, everyone filed into the World Peace Cafe, where our gracious minder for the weekend snuck my friend and I a series of home-baked vegan treats. Then, relying heavily on the flashlight feature on our phones, we headed up the pitch black road to our cottage. Our cottage was called “Top House,” not, I was pleased to find because it’s on some crazy mountain but because it’s at the far edge of the property. It was a mix of guests for the weekend and permanent residents. The rooms were simple but equipped with everything you need. The bathrooms and kitchen are shared spaces.

Quiet hours began at 10pm. Even though it was only 945pm when we returned, the house was already very still. So quiet in fact, that we felt we couldn’t crunch on our snacks without being discovered, so we packed them up and went outside. We located two mismatched lawn chairs—one an Adirondack, the other, a foldable camping contraption—and sat in the darkness, crunching and whispering.

We whispered about life stuff, job stuff, ex-boyfriend stuff, and then the conversation turned to the retreat. I wasn’t sure if I could buy into the whole thing. My critical New York mind was rolling its eyes, hard.

“Surrender…” my friend whispered to me.

We woke up at an ungodly hour the next day and booked it to the dining hall, knowing we wouldn’t make it through the morning meditation without food. The breakfast was very simple and absolutely necessary for survival.

All of the classes and meditations were held in the temple, a grand, looming building, right in the center of the property. The first time I entered, I thought I had died and gone to Thailand. The interior is full of gilded Buddhas and ornate decorations, with the exteriors of the space housing the gift shop and the World Peace Cafe. It’s comforting to know a coffee is never too far away, though sadly, you can’t bring them in the actual meditation space. 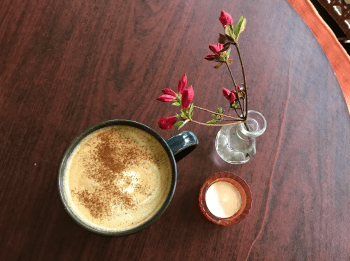 Between the two morning sessions, we fulfilled our caffeine needs, and tried the World Peace Latte, the closest all weekend I got to enlightenment: there’s honey, cinnamon, and some other heavenly, unidentifiable ingredients. It was sweet, but not too sweet.

During the second lecture, I finally began to have less anxiety around the silence of the meditations, which suspiciously seemed to be increasing in length. Much of the teaching is about learning and practicing compassion for others. I tested mine when a stranger obliviously sat on my notebook and did not acknowledge it. The teacher encouraged us to reflect on how we tend to identify with our suffering, thereby prolonging it, when we have the potential to channel our pain into a shared experience, allowing us to act with compassion. It was pretty big stuff for a girl in a moment when I could either feel sorry for myself and my failures, or approach my new life situation like a student.

All that thinking made us hungry. We were first in line for lunch and the menu featured more vegetables than I’d seen in months; a vegetarian curry, dahl, and a hearty salad. I ate so much I got a stomach ache. Some other attendees started discussing taking advantage of one of the many hiking trails on the property, and I began considering my poor choice of shoes for the weekend. That’s when I realized I had run out of cigarettes.

As I mentioned, the taxi to town is about $25 one way. Since I needed to go, my friend and I decided to make it a little trip to check out Port Jervis. The town is small, but cute, and has a surprising amount of spots to hit, including Foundry42 an art cafe, Fox n Hare a local brewery, and Fogwood and Fig, a new vegan restaurant, and a smattering of antique shops. $50 plus dollars later, we returned to Kadampa ready for the next round of meditation.

It was during this session that I had a personal breakthrough, not the spiritual kind, but something like the birth of a passion project. The meditations were clearing my mind of my negative thinking patterns, which made way for a bit of a reset in thinking about how I wanted to spend my time going forward and a writing project I wanted to pursue. I realize this is totally not the point of the teachings from the retreat, but as a beginner, I was okay with just feeling better about things in general. I could confront my pride and vanity later, currently, I was excited to start working on something for myself!

As we headed down for dinner, my friend admitted that she could barely stand the thought of another veggie forward meal.

“Surrender…” I whispered to her. And she did, to a bowl of chicken-less vermicelli noodle soup.

The third day I was ready for a burger and wanted to get home and keep up the momentum I had gathered about planning my project. So we skipped the final teachings in the morning, and also the weekly Prayers for World Peace class that followed, took another $25 taxi ride with a great view, and went back to the city.

How to get there: Take New Jersey Transit from Penn to Port Jervis, from there it’s a $25 taxi ride to the center. For more information on visiting head here.

Photos by the author and Kadampa 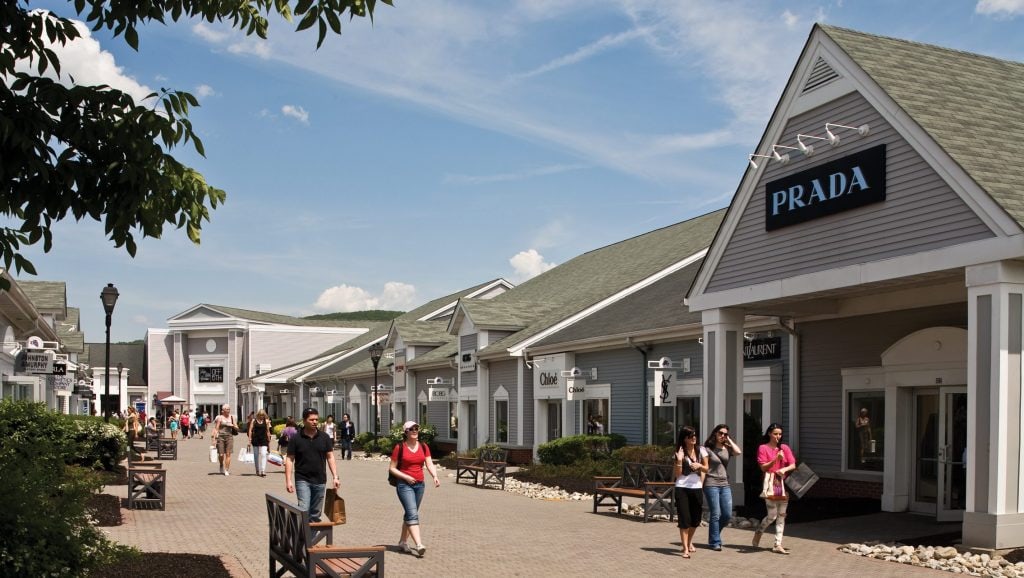