Dumbo is classy. But unlike many classy areas whether it be in New York or beyond, it is not devoid of cutting edge culture. St. Ann’s Warehouse has been an innovator in live performing arts since its 1980 beginnings in Brooklyn Heights. With the greater purpose of raising money to restore National Historic Landmark Church of St. Ann and the Holy Trinity on Montague Street (the organization’s first home until 2001), the initial programming was primarily classical organ recitals. It soon started to introduce groundbreaking puppet theater including Amy Trompetter’s production of Rossini’s The Barber Of Seville with the Brooklyn Opera Society in 1983. Countless other critically acclaimed performances have graced St. Ann’s including such luminaries as The Bread And Puppet Theatre, John Cale and Lou Reed, Nick Cave, Jeff Buckley, Chamber Music Society Of Lincoln Center, Jackson Browne, David Byrne, Al Pacino, Steve Buscemi, Phillip Seymour Hoffman, and the list goes on.

St. Ann’s continues to showcase a who’s who of talent, and often, before we even know who the who is. Currently playing at St. Ann’s Warehouse is a return engagement of the production The Black Watch performed by the National Theatre of Scotland, which has been hailed as the “#1 theatrical event of the year” by numerous esteemed critics. In this highly political time, when the Iraq war has been center stage for national disbelief, The Black Watch takes a soldier’s-eye-view of the battlefield with more honest power than any of our media sources can convey.

If you find the gravity so strong in Manhattan that you have trouble ever leaving, consider St. Ann’s a resounding excuse to bust out of your bubble. Just on the other side of those two bridges, you’ll feel close to home with one of the most spectacular views of Manhattan behind you. If you have time, walk towards the waterfront of Fort Trion State Park and you’ll be reminded of how magical this city looks from afar.

The Black Watch provides an interpretation of the Iraq war that takes audiences to the battlefield with a poetic power beyond the grasp of journalism, film or TV. The action veers seamlessly and imaginatively between pub-set interviews and in-the-moment deployment scenes, careening between past and present with hallucinatory immediacy to a live musical score that includes regimental folk songs and thrilling bagpipes. The physicality of The Black Watch is extraordinary and brings war to life, intimately portraying how members of this historic regiment dealt with an intense tour of duty in Iraq and what it means to make the journey home again. The Black Watch has been extended to run through December 21.

In 2004, artistic director Susan Feldman and St. Ann’s Warehouse were awarded the Ross Wetzsteon Obie Award for the development of new work. Feldman took time out of her busy schedule to answer these questions for offManhattan.

oM: Is it a challenge to constantly live up to the reputation St. Ann’s has built?

SF: “The challenge is not in “living up to” our reputation. The challenge is in being able to maintain the levels of support and energy needed to consistently respond to creative artistic opportunities. That means getting out and finding great work, and then marshaling the resources of governments (both here and abroad), foundations, donors and co producers. We’re constantly seeking the “perfect fit” for St. Ann’s versatile space and adventurous profile.

St. Ann’s Warehouse recently received and has matched a generous challenge grant to form an ongoing production fund, which we can use to commission and advance future projects. That is one tool that will help us continue to develop and bring the best work from around the world.”

oM: Have you ever had to turn away acclaimed artists from your programming?

oM: Did you bring The Black Watch back during election time intentionally and how important are politics to what St. Ann’s is trying to do artistically?

SF: “The election was not one of the reasons for the timing of The Black Watch, but being a central issue of the campaign, behind the economy, it did make it topical. When the show first ran at St. Ann’s Warehouse in Fall 2007 amid an avalanche of overwhelmingly positive audience and critical reaction, we knew we had to bring it back so it could be experienced by a wider audience. Concurrently, National Theatre of Scotland was also looking to end two years of constant touring, and bringing it back to New York for three months would make the perfect culmination.

We do have an activist sense about us, although we are definitely not looking for overtly political messages in the work we present or produce. The activism is in the soul of the artists and the work they are doing.”

oM: Why do you think Black Watch is the must see show it has been hailed to be?

SF: “Because it is the soldier’s story. Many people who have served in Iraq have seen this production and they all seem to agree that this show explains what it is like to serve in the Iraq War better than they are even able to articulate for themselves. Despite anyone’s politics there is a human side to the story and this is it—we forget that sometimes and this play serves as an important reminder.”

How to get there: The venue is accessible to several subway lines: the F train to York Street, the A or C to High Street, and the 2 or 3 to Clark Street. Or if you’re downtown and up for a nice walk, take the footpath over the Brooklyn Bridge. This path turns into Washington Street. Continue toward the river on Washington Street, lake a left on Water Street and look for the address. The theater’s website provides more detailed directions, or click on the HopStop link below for directions from anywhere on Manhattan. (St. Ann’s Warehouse, 38 Water Street, Dumbo, Brooklyn, Box Office: 718.254.8779, 866.811.4111, stannswarehouse.org) 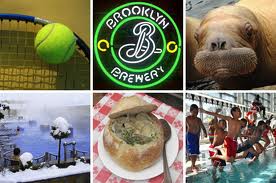