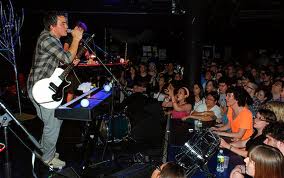 Last weekend was such a rockin’ thing of beauty, we’re still wrapping our heads around the talent and energy that came out of the Northside Festival. After this event, there will undoubtedly be more than just hipsters loitering the streets and avenues of Williamsburg and Greenpoint. Whether the nabe’s future scene-sters catch a train from south Brooklyn, uptown Bronx, Douglaston, Queens or an island off Manhattan, a trip to these tucked away areas is worth a subway swipe and a night of your time to discover something new. So, now that L Magazine’s four-day music and arts festival has come and gone, here are a few bands and show curators that topped our best discoveries of the weekend list.

Bands
Canadian based Sunset Rubdown (pictured above) put on a show full of their favorites including some songs from their upcoming album Dragonslayer. Songs like “Us Ones in Between,” “Shut Up I’m Dreaming” and “The Mending of the Gown” were crowd favorites. “Our songs are just lyrics over feelings,” said lead Spencer Krug, singer, songwriter, and keyboardist for the band. The crowd understood his shrill cry-like vocals and his bands addictive drumming and stringing of the guitars. This is a band you want on your road trip soundtrack.

Meric Long and Logan Kroeber are the initial duo making up the indie rock band, The Dodos. Long’s training in West African Ewe drumming is crucial to their sound, which blends acoustic guitar and metal. Instruments like the xylophone, toy piano, and percussions are handled by musician Joe Haener when they are on tour, making for an enriching if quirky performance. Seeing them live, you can’t help but get up on your feet and do a call-and-response to their soulful hoots and yelps. For a listen of the Dodos guitar and drumming work from the Festival check them out at themusic.fm.

A stompy, yet sweet sounding band, Drink Up ButterCup formed after a jam session in a barn in Bucks County where they “scared the hell out of some horses,” said Jim Harvey, one of the four band members. Much of the joy in hearing this classically influenced band (who often plays sing along songs for their audience) is seeing them live. “We give all of our tears, sweat, and literally blood when we entertain,” Harvey continued. “Stick around for a minute and don’t get scared away by some of the more out there sounds. Our musical influences turn out to be a happy type of magic combination.”

Show Curators
BrooklynVegan isn’t new to the music festival circuit. In addition to Northside, the organizers curate many shows for major festivals like CMJ and SXSW. “With so many venues and bands making music we cover a lot of genres. The main goal is to find bands that we want to see live and make a show from it,” said a BrooklynVegan spokesperson. During the festival, artists from Sweden, Iceland, and San Francisco performed, and the lineup promises to be just as diverse next time.

Blogger and show curator, Hooves on the Turf, allowed its video series the Secret Garden to inspire the lineup for the showcase. Whether the band is local or from out of town, “Our goal is to capture the elemental space of music, and to celebrate people making good music with a passion,” said Sarahana of Hooves on the Turf. “Live music is really the only reliable way to discover bands and understand their vision. Brooklyn’s culture lets a communal spirit and individualism co-exist.”