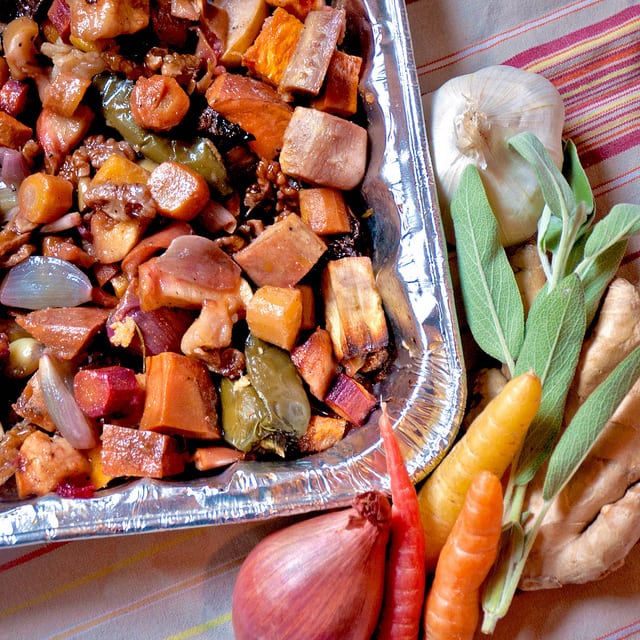 Whether you’re a full-fledged gourmand, an occasional foodie or a dabbler by association, the fanfare that surrounds the New York City Wine & Food Festival brings the city into edible overdrive each October. The 5th edition was no exception, blending a battalion of celebrity chefs, restaurateurs, culinary personalities and sommeliers with their adoring public for four days of non-stop manna.

The delectable odyssey is for a charitable cause, with proceeds benefiting the Food Bank for New York City and No Kid Hungry. If you missed this year’s fun, oM was there to bring you the top chefs’ tips for a palate-indulgent fall dining season.

Chef Meets Farmer Dinners and Brunches were standout (and sold-out) events. These chef-prepared meals highlighted locally sourced products such as Long Island duck from Crescent Duck Farm, the last remaining duck farm on Long Island. Free-range eggs from North Fork Egg Farm, also on Long Island, were savored in several preparations. Widow’s Hole Oyster Co., in Greenport, Long Island, single-handedly started the revival of the Greenport oyster, and these crustaceans were a mouth-watering menu presence. Urban-grown herbs and honey made from bees living on Manhattan rooftops were a few of the ultra-local condiments utilized. The emphasis on fresh, seasonal ingredients resulted in a scrumptious Shangri-La of flavors.

2. Get the kids involved

Guy Fieri gets the Father-of-the-Year award for spearheading the family-friendly ‘Fun and Fit in the City’ day. Eating right, better quality school lunches and exercising were some of the healthy lifestyle habits promoted. ‘Bizarre Foods’ host Andrew Zimmern has no problem eating exotic, but he had some tips on how to get your kids to eat more adventurously. This native New Yorker (and father) advocates honing your child’s palate on street food. If they don’t like it, there is a minimal cost outlay. He claims to have never gotten sick from eating anything and his golden rule is make sure that hot foods are served hot and cold foods are cold. Guy Fieri encouraged getting your kids involved in food preparation. It doesn’t have to be complicated to be healthy and tasty. He favors making simple smoothies and easy-to-mix homemade granola with his own kids.

Chefs like Bill Telepan hammered home the idea of choosing de-centralized food whenever possible, noting that most recent food-born illness outbreaks have come from mass-produced products such as peanut butter and bagged lettuce. Farmers Markets are an obvious fresh food resource, and chefs encouraged city dwellers to grow their own herbs. A sunny windowsill and a container with good drainage is all you need to have fresh-snipped parsley, chives and thyme to enhance your recipes. How Stuff Works has a good guide to getting started.

With the depth of up-and-coming gastronomic artistry so broad, the festival is the place to feast on talent whose culinary prowess you may not yet be familiar with. Don’t be surprised to bite into a tantalizing morsel cooked by the next big epicurean high roller. Wunderkind Eric Haugen may be only 26, but he has a resume that makes chefs twice his age turn green with envy. After an eclectic kitchen career that included a stint at The French Laundry, he headed to Rhode Island to helm Seasons at the Ocean House hotel. His staff included an in-house forager, so Haugen cut his teeth creating nightly menus based on foraged ingredients. Currently Executive Chef at The Lambs Club, he hosted the sold-out ‘Hot Cocktails from the Kitchen at The Lambs Club.’ Sipping his cocktail repertoire confirmed that his passion for best quality ingredients embraces his liquid creations, which are made with top-shelf brands, fresh ginger and local honey.

Experimenting with unusual grains and legumes was a noted theme. Red and white Quinoa, amaranth, wheat berries, farro and Anasazi beans are a few of the ancient ingredients that are making a comeback on the modern table. These venerable ingredients are healthy and texture-rich, utilized by vegan, vegetarian and meat-eating chefs alike.

With winter looming large, the buzz was all about root vegetables. Rutabagas, celery root and beets were praised for their availability, low prices and health value. The commonplace potato was the food of choice for Food Network chef Alex Guarnaschelli. She urged her audience not to overlook these economical, versatile, vitamin-rich tubers. Her preparation of choice is a savory potato cake. In her kitchen at Butter restaurant, Guarnaschelli slices white potatoes razor thin, arranges them in a layer in a cast-iron pan and fries until golden brown.

There was good reason for the near endless queue to try quadruple-distilled Bulldog gin at the Grand Tasting event. This British gin is infused with twelve botanical notes, including licorice, poppy, coriander and lavender. It creates a harmonious herb-infused taste with a classic juniper finish that makes it the just-right mixer for your favorite winter cocktail.

9. A new twist on an old classic

Local restaurant and nightclub Lavo tempted festival goers with Kobe beef meatballs. Italian grandmothers everywhere may be cringing at the thought of using such expensive beef to make meatballs, but these little powerhouses were fabulous. Served swimming in a sausage-laced red sauce with a dollop of whipped ricotta on top, they were melt-in-your-mouth tender. Here’s the recipe. At the Grand Tasting, crowds were also seen devouring American classics like hot dogs, brisket on a bun and New England clam chowder.

Wine pairings have moved away from your mother’s wine and cheese party. Wine and chocolate pairings were a trend. Dark chocolate and red wine is a classic combination, but the event presented some previously taboo pairings, like milk chocolate teamed with dry white wine. Several pairings teamed organic chocolate with biodynamic wines.

Toast to Life: A Wine Film Festival Begins in Brooklyn