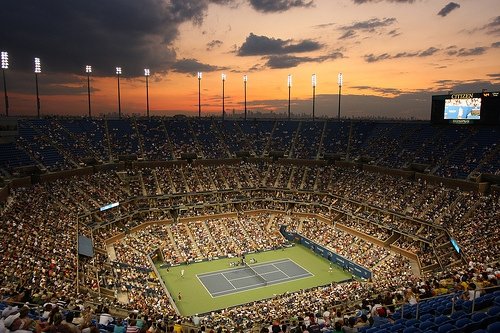 After watching Federer, Djokovic, Williams and more swing and slice their way through the French Open and Wimbledon, the tennis action finally comes full circle to Flushing, Queens with the US Open. From August 26 to September 8, the air at Billie Jean King National Tennis Center will be thick with the cries of “40 serving love” and “double fault,” to the applause of the crowd in Arthur Ashe Stadium (see our guide to the best tickets, courts and activities at the Open here.)

But what is there to do if your passion for watching live tennis is bigger than your paycheck? With the U.S. Open Qualifying Tournament and Arthur Ashe Kids’ Day, you can enjoy some world class matches and walk amongst the world’s top players for free.

Feel the excitement of a front row seat and watch as up-and-coming tennis stars and seasoned professionals compete for entry into the U.S. Open at the Open’s four day long qualifying tournament. The largely unknown event takes place before the main event, and is completely free of charge. Settle onto a set of bleachers beside the court or press up against the chain-link fence for a better view than any paying visitor would receive during the official tournament. Competitors from the U.S. and international players will vie and volley for greatness on the field courts adjacent to the Arthur Ashe Stadium, all in the name of winning entry into the U.S. Open.

The tournament begins each day at 10am, and can last until late into the evening thanks to the lighted stadium. With players facing off simultaneously throughout the day, hop from court to court until settling on a particularly enticing game. Big name players use the days leading up to the tournament as down-time to prepare for the US Open so you never know who you’ll see. Where will this preparation occur? Right at the stadium they will be facing off at. Head to the enclosed practice court near the Billie Jean King Center for a chance to glimpse the greats practicing.

Fun for all ages and tennis skill levels, the activities at Arthur Ashe Kids’ Day on August 24 are catered toward the whole family. Explore the grounds of the Billie Jean King National Tennis Center and you’ll find a plethora of enjoyable and enriching activities. Beginner players can test their agility and practice movement and advanced players can get some practice time in with professional coaches. Even those too young to grip a racket can get into the spirit, with a face-painting area and balloon station.

In the afternoon, Arthur Ashe Stadium opens its doors for a star-studded assortment of entertainment, including celebrities, athletes and musical acts. Catch popular pop musicians, DJ’s and tennis stars. The only aspect of our guide that isn’t free, seating for the stadium show begins at $10 plus taxes and fees, and reaches $40. When the show ends at 3pm and the entire brood is exhausted, you can head home with the satisfaction of seeing your favorite players and getting a taste of the U.S. Open fever, for free.

For info on attending, check out our guide to the U.S. open here.

oM Giveaway: A Hiking Adventure of Your Choice With Outdoor Bound