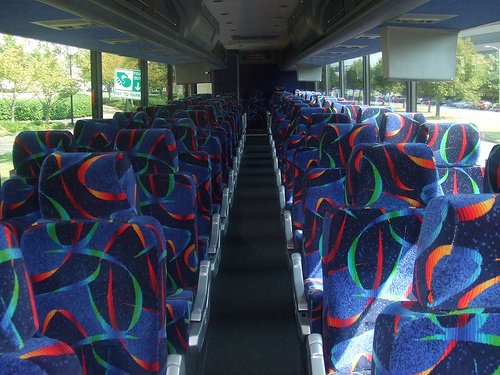 So often have I been on a bus, traveling to another city, and dared to dream the tiniest of dreams that the driver might play “The Gift” by Velvet Underground on loud speakers as I talked to a person with a neck tattoo about our tweets.

Such is the buzz behind a new Brooklyn to D.C. travel bus service officially named The Know it Express, but colloquially known as “The Hipster Express.”

The new shuttle service runs once a day, Friday through Monday, between U Street Metro in D.C. and Atlantic terminal on Flatbush and 4th avenues in Brooklyn. Fares are $25 one-way with a $5 roundtrip student discount. Included is free wi-fi, bike storage, and a laptop borrowing service that lets riders share a laptop during the four-hour trip.

Know It Express makes a big deal about clientele. The aim is to attract young riders with disposable income who populate the neighborhoods near U Street and Brooklyn. Traveling the Hipster Express means no stops in midtown Manhattan or K Street. You know, where the suits hang?

It might also mean letting riders make DVD choices for the overhead televisions. So if you happen to have, oh I don’t know, the 2-hour documentary Gates of Heaven about a pet cemetery business in California, and ridership approves, then the bus driver will play it!

The point being, you ride with eclectic people who like to share similar interests. It’s encouraging community on a bus trip, and if that sounds more like a nightmare, you’ve never seen Gates of Heaven.

Know It Express offers low cost and convenience without sacrificing good service. No need being a hipster to appreciate that value. Visit knowitexpress.com for schedules and more information.