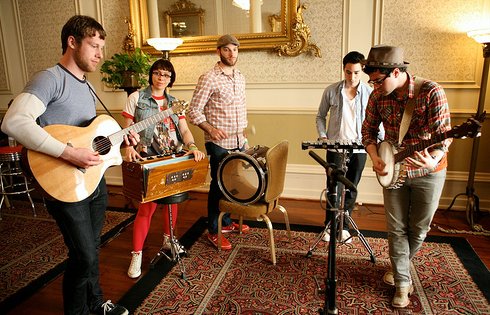 The Queens-based band Freelance Whales is a group of musical hustlers on a mobile mission, panhandling for listening ears by any means necessary. They recently sold out the Bell House, overtook the Williamsburg Bedford stop on the L-train for an impromptu platform concert, and played 11 shows at SXSW, before returning to Boston where they will join the Shout Out Louds for a tour in May, and on the heels of a brand new album.

Whether on stage or atop an underground subway platform, Freelance Whales is spreading the gospel of experimental sound by pop-crooning over cellos, hammering glockenspiels, and synthesizing melodies with microKorgs. While knitting a scarf on the way to a gig with Cymbals Eat Guitar and Bear in Heaven, Doris Cellar, the only girl member of FW, took a moment to speak to us—about what’s good in Queens, inspiring dreams from Delaware, and wanting more hands—from Nashville, Tennessee.


oM: FW is listed as one of the bands to watch in 2010. What is it that’s making you guys the subject of indie-band talk this year?
DC: Things are happening so fast, usually bands aren’t talked about until they’ve been around for maybe 10 years. A lot has to do with how we started playing the subways of New York back in October of 2009. It was an idea we had to try to get the attention of strangers—those just walking by in the subway. We played six hours at a time every Friday and Saturday night. People started hearing us and spreading the word. And then we opened for Fanfarlo on their U.S. tour and they started tweeting about us.

oM: We actually became aware of Freelance Whales through one of Fanfarlo’s tweets. Your music feels young and innocent, there is suspense to its rhythms, makes the listener feel free. How did the arranging of the music come about?
DC: Judah Dadone wrote the songs and he put them out in search of a band. I was searching for a band too. He contacted me and said I have these songs do you want to get together and play them. We clicked right away. He had a harmonium and I was excited to pick up a new instrument and see what could come out of it. We went to the studio with his ideas and ornamented them with a base line and some harmonies. It was like he planted the seeds then we watered them and gave them life. It took us a year in the studio, and then performing in subways was a big factor for us; experimenting in front of new people helped us harmonize our sound.

oM: How would you describe the experience of FW to someone hearing you for the first time?
DC: We’re new so we try and have fun with it. We execute songs in a way where it’s enjoyable. Improvising is really important to us. We’re always thinking of new ways to do our songs. We feel each other out while on stage too—Judah and Kevin just played a show where they kept bleeding the guitar and it’s that moment where you’re brain expands and says I think this part would go great here. A huge part of doing a good performance is having a bright full sound. On one of our songs, I’m hammering on the belt harp while my right hand is doing bell noise on the glockenspiel. It’s unfortunate that we only have so many hands, but we try to incorporate as many instruments as we can.

oM: The title of your debut album is WeatherVanes? Are you trying to point people in a specific direction musically?
DC: I’m speaking for Judah because he had a dream log. The lyrics are based upon some recurring dreams he was having in a house where he lived in Delaware as a young boy. When he decided what he wanted the cover art to look like he got his girlfriend at the time to sew pieces of fabric together for the album art. But, let me pass the phone to Judah to have him answer because it’s such a good question and I should let him answer it. [Doris passes the phone to Judah.]

JD: There are a few reasons for the name Weathervanes. It was a word used in one of the songs that got cut. But then we started thinking about what weathervanes looked like with the little animals perched on top. There’s a notion that there’s an animal spirit encapsulated on the perch. There are also a lot of moments on the record about spirits of animals being trapped or in a holding vessel.

oM: Does FW feel that it’s trying in some way to musically free the souls of its listeners?
JD: Good question. I’m not sure. But the music is about souls moving from one place to another. The transferring of energy is a persistent theme in our music. Even the opening song on the record is about cranking hand held generators to power up a house. It’s about that potential energy converting to kinetic energy.

oM: Doris, it’s not often that we hear of bands being based in Queens? How did that happen and what do you love about the borough?
DC: Although we live all over New York, we’re Queens-based because my rehearsal space was there and we’d rehearse there twice a week. I live in Astoria and it’s a great place for any kind of food—India, Thai, Greek, American and Mexican—and I’m not saying that because I’m Greek. I hang out up and down Broadway and 30th; it’s a friendly place to relax, get a coffee, dinner.

oM: Lastly, like your friends Fanfarlo, you’re the only girl in this band, what’s that like?
DC: [Laughs] It’s like having a whole bunch of brothers. And being with a whole bunch of guys makes me want to be more feminine. I’m trying to level out all this masculinity with some femininity. They take care of me like I’m their little sister; we’re all one big happy family.

The band’s next record, LP WeatherVanes, is out April 13th On Frenchkiss/Mom + Pop Records. For tour dates visit TheFreelanceWhales. 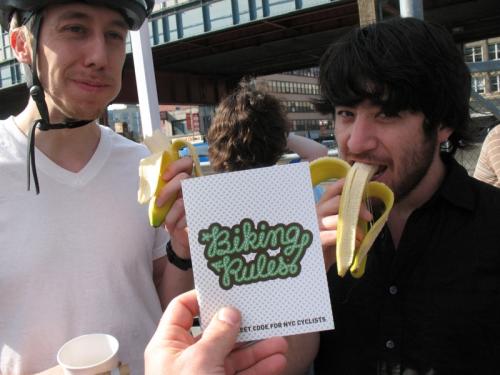