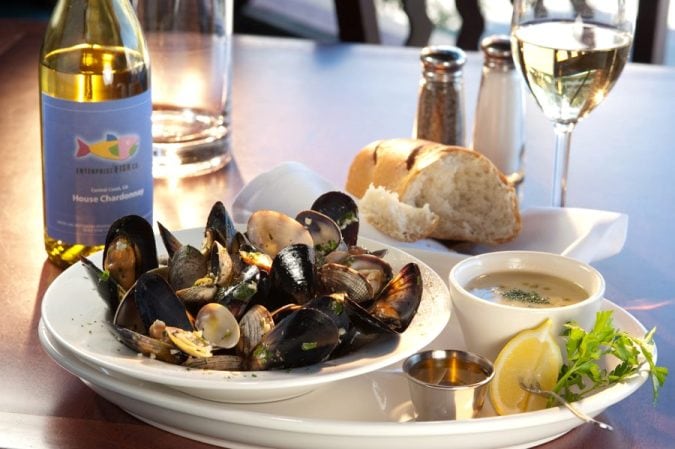 We interrupt your healthy New Year’s resolutions with this message: It’s California Restaurant Month. We know, it seems like cruel and unusual punishment (or at least a serious test of willpower) to time a month’s worth of delicious deals with fresh starts and shiny new vows to work off that holiday gut. But think of it this way: Restaurant Month doesn’t have to be about gorging, and it can even help you accomplish some of those other New Year’s resolutions.

Live well on less? Check. Support small businesses and eat local? Check and check. And so, without further ado, some great restaurant months and weeks around the state. Make a date night of it, or make it a winter weekend getaway. And hey, if you pack on a few in the process, it’s winter anyway (and February’s a nice month to start that other, less fun resolution…).

Share the Bounty
When: January 15-31
Where: Throughout San Mateo County, including Burlingame, San Mateo, Half Moon Bay, and Palo Alto.
Deals: Deals vary by restaurant, from a complimentary appetizer to fabulous multi-course prix fixe meals.
Website: smccvb.com
Make it a day: Check out our favorite things to do in Burlingame and Palo Alto.
Directions: Depending on your destination, Caltrain or SamTrans will get you where you need to go.

Napa Valley Restaurant Month
When: January 1-31
Where: All Napa towns, including St. Helena, Napa, and Calistoga.
Deals: Deals vary by restaurant, and a variety of hotels are also offering accommodation packages.
Website: visitnapavalley.com
Make it a day: Check out our favorite things to do in St. Helena and downtown Napa.
Directions: Amtrak can get you to Napa, or for other destinations you can catch the Baylink Ferry to Vallejo and transfer to the Vine.

Eat Tri-Valley
When: January 7-February 3
Where: Livermore (January 14-20), Pleasanton (January 21-27), San Ramon (January 28-February 3)
Deals: Deals and events vary. A percentage of all proceeds goes to local charities.
Website: trivalleycvb.com
Directions: BART will get you to most Tri-Valley destinations, although it may be easiest to drive out to Livermore.

For all Bay Area cities, check out our transit guide for specific directions by destination.

Santa Ynez Restaurant Week
When: January 20-26
Where: Throughout the Santa Ynez Valley, including Buellton, Santa Ynez, and Solvang.
Deals: Three-course tasting menus for $20.13
Website: visitthesantaynezvalley.com
Directions: Take Amtrak to Santa Barbara, and then you can catch the Clean Air Express.

Dine LA
When: January 21 – February 1
Where: Throughout Los Angeles County, including West Hollywood, Hollywood, Santa Monica, and Beverly Hills.
Deals: Prix fixe menus from $15-$25 at lunch or $25-$45 at dinner.
Website: discoverlosangeles.com
Make it a weekend: Check out our favorite things to do in Westwood or wine and dine in Santa Monica.
Directions: If you fly, it’s easy to get around via public transit, or you can take your electric vehicle to one of these EV-friendly hotels.

Newport Beach Restaurant Week
When: January 18-27
Deals: Prix fixe menus from $10-$20 at lunch or $20-$40 at dinner.
Website: newportbeachdining.com
Make it a weekend: Check out our favorite things to do in Newport Beach.
Directions: You can fly into John Wayne Airport which is easily accessible to Newport Beach by bus (the bus 76 connects to various lines that reach Newport proper).