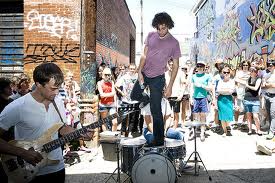 Why: Artscape is the country’s largest free public arts event, bringing more than 150 artists, designers and craftspeople to the streets of Baltimore, along with a stacked roster of musical shows, featuring headliners Dionne Warwick, Cake, Robert Randolph & The Family Band, and the Baltimore Symphony Orchestra.

But while the big names draw crowds, the true fun of Artscape comes from strolling the fair as it rambles through the Station North District, chatting with artisans and vendors and serendipitously stumbling upon street theater or some of Baltimore’s hipster hula hoopers.

Local cultural institutions like Maryland Institute-College of Art, the Theatre Project, the Lyric Opera House and the University of Baltimore will also be hosting events. Meanwhile, the Baltimore Museum of Art will, in conjuction with Artscape, have installations from the winner of The Janet & Walter Sondheim Prize and five finalists on view until August 16.

How to get there: Both Amtrak and BoltBus stop at Baltimore’s Penn Station, at 1515 N. Charles St. Check schedules and fares at amtrak.com and boltbus.com. The event is just a few blocks south of the station, in the aptly named Station North District and centered around the Lyric Opera House at 140 West Mt. Royal Avenue. (artscape.org)