Home Bakery Get Up and Ride: A Self-Guided Bike Tour of Williamsburg, Brooklyn 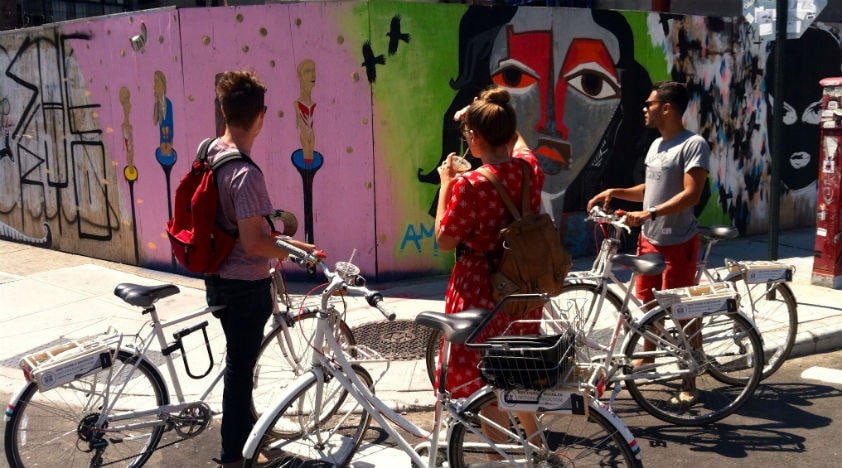 Ah, Williamsburg. Some people call it Billy, but I always feel like a weird old man calling San Francisco “Frisco” when I hear that, so I stick with its formal name.

Bedford Avenue (you may have heard of it) is the main thoroughfare, which to me feels like Vegas + Hollywood + Haight Ashbury + Schlesische Strasse all dumped into one big boiling cauldron of international scenesters. It’s like that Mitch Hedberg joke where he invites a bunch of people to join him in a hot tub, then throws in a bunch of spices and veggies and says “now just enjoy and simmer… I mean… SIT THERE.” But I digress.

There is more to Williamsburg than the tender morsels of Australian glockenspiel players and Japanese fashion photographers, but you should still start your exploration of the neighborhood at the epicenter of the madness, at the Bedford Ave stop on the L.

It being a bit chilly already, let’s focus on riding bikes and getting some nice sightseeing in, while mixing in a healthy ratio of indoor activities and belly warming hideaways—we’re cyclists, not eskimos. Start with a nice brisk ride north on Bedford Ave., to the top of the neighborhood at McCarren Park. There are hot people exercising, spoiled dogs relaxing in their own VIP lounge, intimidating baseball players (one team, The Haters, have uniforms that say HATER NATION on the back) and if it is Saturday, you might spot a sandy haired Jedi buying a bushel of apples.

Moving southeast, take Driggs to Metropolitan Ave and stop in to visit The City Reliquary Museum, a tiny, nostalgic homage to the oddities of the history of Brooklyn. If you aren’t pleasantly surprised by something you find in this museum and its shop, you are a terrible person. There are lots of neat spots to grab a beverage and a bite to eat, too—Oslo Coffee Roasters and Momofuku Milk Bar. The Roebling Tea Room feels like the business your Victorian widow great-great aunt would have founded.

Back on your bike and ready to explore more, continue to ride south on Driggs, taking time to note the changes in the ‘hood as it shifts from gentrified hipsterdom to old school Puerto Rican to, once you’ve crossed under the Williamsburg bridge, the really old school Hasidic Jewish community. There aren’t many local businesses to patronize in this area, but riding your bike through it is a very interesting experience. Everything about the neighborhood makes it obvious that a very insular and specific community lives there: the style of dress, the language, the types of shops… even the architecture changes drastically.

Looping west on whatever quiet street you’ve ended up on, ride to the Brooklyn Greenway, the gorgeous and speedy protected bike path that runs along Kent Ave. Head North, and plan to stop off at the tiny hidden park at the bottom of Grand Ave., where the ferry to Brooklyn used to land, and try to figure out what that enormous smokestack is doing in the ground. If you are looking to be indoors again, and it happens to be a Monday, you can visit the elusive International Paper Museum, or if it is any other day, stop in to the Sketchbook Library to have your mind blown by just how quirky our words, and the things we write them on, can really be.

By now you are most likely ready for dinner, drinks, and some obscure indie music, AMIRIGHT? You can go for a quick tour of the Brooklyn Brewery (and go bowling after at the adjoining bowling alley/concert venue). Do the luxurious and renowned Scandinavian prix-fixe dinner at Aska, the not-so-secret-anymore restaurant in the back of Kinfolk, or have Japanese at the maze-like and super mysterious Zenkichi, which is my favorite dining establishment of all time. Late night, because you have the stamina of a wolf, check out the music scene in Williamsburg at Baby’s All Right or the oh-so-classic Knitting Factory.

And if you’ve made it this far, you’ve basically shown Williamsburg who is boss. Just don’t let it get the better of you by giving in to late night pizza back on Bedford, YOU WILL REGRET IT. Don’t say I never gave you any good advice, now.

Photo: Get Up and Ride

The Best Things to Do in Saugerties, NY