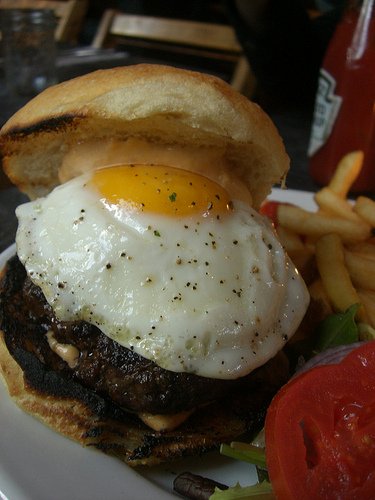 At the seam, where fast gentrifying Greenpoint meets the Williamsburg bar strip, a charming American bistro with an Australian accent caters to empty bellies at its own comfortable pace. With the likes of Sharkey’s Auto Driving School flanking one side and mom and pops running the rest of the block, the triangular storefront of Heath Ledger’s Five Leaves fits well in its working class neighborhood.

One late Friday morning, I stopped by to explore the breakfast menu. I ordered the ricotta pancakes, which arrived garnished with berries and a sizable cut of banana. As I plotted my attack, Jud Mongell, the owner, stopped by the bar where I sat scrutinizing the fluffy stack. “Pour some more on there. Don’t be so skimpy with the syrup!” he teased. I asked why he had numbers scribbled on the back of his hand. “It’s what I owe the fish guy,” he shared with a grin, noting that the grilled salmon (accompanied by braised leeks, artichokes in a lemon chive broth) seemed especially popular with the ladies.

The clientele appeared to share a penchant for plaid and designer thrift while tattooed bartenders sport trucker hats and engaged in easy conversation with regulars who stopped in to shoot the breeze. Throughout the day, passersby bobbed into view at the “Coffee To Go” window for their caffeine fix before hustling to their next destination. Apparently, dinnertime draws a crowd made up mostly of pairs. “It’s more fancy at night,” says Alston Paresa, who has worked the bar since Five Leaves opened last September.

With a persimmon-colored bench stretched across one wall, distressed timber planking, and maritime furnishings (note the oversized prow-shaped bar and the submarine door to the loo), the quirky interior provides a striking setting reminiscent of outdoor dining, but on the inside.

Off-the-menu dishes change daily with Aussie elements that pervade the regular breakfast, lunch and dinner listings. Some favorites are available from noon to midnight, like the savory and subtly sweet house burger, which is topped by fried pineapple and a mouth-watering golden egg served sunny side up.

While Jud’s friendship with the late Heath Ledger kindled their partnership on Five Leaves and helped put this cozy corner bistro on the dining map, it’s the Aussie accents that make it irresistible. After all, there are few things more disarming than a neighborhood joint whose regulars jokingly plead, “Please don’t write about this place ’cause then everyone will know…” in an effort to defend home turf. Still, if you must come, they recommend you try the oysters.

Sweat the Free Stuff: An Eco Stitch and Bitch Party