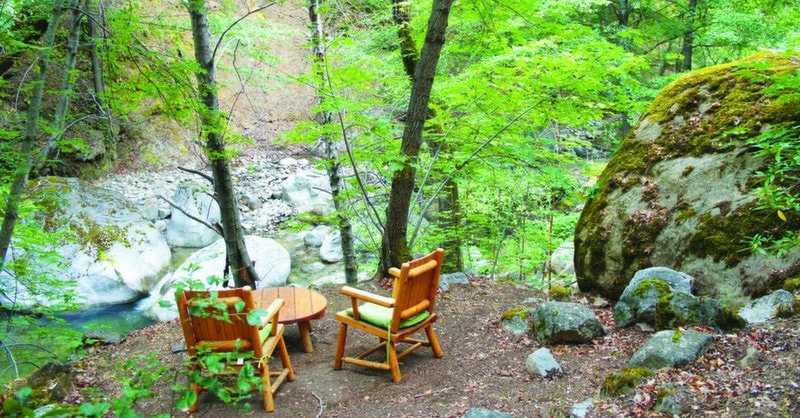 Truth: I am not a “Kumbaya” sort of person. As a writer and traveler, I come naturally by a streak of the dreamer, but campfire chants (or any chants, for that matter) tend to make me squirm. I do yoga in search of killer abs more than inner peace, and am probably the only person I know who has not read Eat, Pray, Love. And while I do my best to admire the unity of humanity, I am city girl all the way: pecking at my phone on public transit, huffing at crowds—unable to quiet my mind and with little time or desire to try. Until I attended a wellness retreat at Tassajara Zen Mountain Center.

It even feels a bit “hokey” to say it all changed in one weekend. And, to be honest, it didn’t. But still I am not the same. And I wouldn’t be alone in asserting that this place has magic.

Long before it held the first Zen monastery outside of Asia, the valley in the heart of the Ventana Wilderness was something special. The native Esselen people knew it for the restorative properties of its hot springs, and late 19th- and early 20th-century guests would “take the cure” at Tassajara Springs Resort. Zenshinji (Zen Heart-Mind Temple) was founded in 1967 by Japanese Zen master Shunryu Suzuki-roshi, who had founded the San Francisco Zen Center five years earlier.

A place of calm, contemplation, and renewal, Zenshinji has a tradition  of opening to the public for the summer season (April through September), its way of serving the community and “water[ing] the seeds of Zen practice in the West.” Guests may take part in retreats focused on yoga, mindful living, creativity, and more, or simply soak in the hot springs, hike in the mountains, and lounge by the pool. Either way, they become part of something bigger, leaving the connected, wired (and wireless) world behind in favor of chirping birds, kerosene lamps, and a daily rhythm that floats through the valley on the soothing vibration of a gong.

Even the journey to this place feels like something otherworldly. As I wound past the quaint hamlets of Carmel Valley, the quiet washed over me, so that by the time cell reception disappeared in the one-horse-town of Jamesburg, most anxiety of losing connection had faded blissfully away. Then it was into a “stage” for the last leg of the journey. These days an SUV, the stage is so named for the stagecoaches that once made this harrowing 14-mile journey, winding up a rugged road to 5,000 feet, and then back down to Tassajara Creek at 1,500 feet.

As we bumped along (thankfully without a 10-foot pine that was attached to original stages to slow them down), the calm settled. Some spoke in hushed tones, but mostly we took in the sculpted mountains, old-growth pines, and quiet. I was overcome by a sense of wonder when the valley opened up before me, resplendent in the afternoon light, my very own brigadoon outside of time and place.

I signed on for “Dragon Song—A Zen and Vinyasa Retreat” on a whim. Feeling overrun and rundown, I found the prospect of forced isolation appealing. And there was a sort of summer-camp excitement that had me proudly changing my email bounce back to read, “I am off the grid without any reception…”

My excitement was as much curiosity (and admittedly a little skepticism) as it was openness to the experience, but from the moment I saw the sun beam over a tranquil Zen bridge, I was entirely on board. Tassajara had immediately and completely cast its spell, and any aspersions of the “hippie-dippie” variety melted away with the last bars on my cell phone.

The retreat group was a motley crew including lawyers, executives, artists, and Zen priests—seasoned yogis and fledglings alike. All seemed equally under the spell. That first night, we sat in a circle as Zenshin Greg Fain, the Tanto (head of practice) at Tassajara and leader of our retreat, told in his mellifluous baritone the tale of “the dragon song that comes from the withered tree.” Then we each meditated on our personal renewals—healing a broken heart, opening up, slowing down…

When we finally linked hands to pass energy around the circle (an activity I would ordinarily consider “hokey”), I found I had given myself over to the experience and promised myself, and this place, to relinquish completely.

The word “vinyasa” has a number of meanings, but names a type of yoga characterized by its flow. Our days at Tassajara, both inside the yoga studio and out, had that fluidity to them. I happily awoke to the 5:20 a.m. bell for morning zazen (seated meditation), and reverently removed my shoes at zendo, relishing in the feel of the smooth wood beneath my feet. Settling on a zafu pillow, I dutifully imagined my “cobalt-blue tail” grounding me into the earth as had been described in day one instruction.

Sitting still for so long was not easy, and my mind admittedly wandered as I gazed at the wall (why do we face the wall? how is he sitting so still? what is she thinking? should I be thinking? what is for breakfast?). But here was a place to just be, just me with myself, without judging or being judged. When the service began one felt the full embrace of the community, students helping visitors to find their place in the chants, voices resounding and bodies bowing as one.

I stepped out into the brightening mornings feeling surprisingly awakened and alive, ready for a day of yoga and more meditation, punctuated by a nap by the pool or a hike in the magnificent, etched mountains, and, of course meal times, ceremonies in themselves. Marked by the gong, meals were a communal affair where all shared in exquisite, lovingly prepared vegetarian dishes. Even putting together one’s bag lunch had a particular ritualistic quality: choosing among and celebrating homemade spreads, roasted veggies, and the famous Tassajara bread.

Also communal (much to my surprise) were the baths, where I quickly learned that “clothing optional” really meant “nude.” These too have a ritual to them, though, and once I understood that, discomfort easily melted away in the medicinal, sulfuric hot springs, where the ladies detoxed and chatted after a day of activity. (Even more magical, I discovered, is an early morning soak, when all is quiet and the valley wakes up before your eyes.)

When our final circle came around, tears were shed by many—for the newly forged friendships, for the personal progress, for the beauty that comes from quiet, and (for me anyway) for the surprise of it all.

The peace I captured at Tassajara lasted far longer than expected. It lasted as we bumped up and over the mountain, and well after my phone buzzed back to life, tittering with text message and email overload despite my silly away message. Later, it was just me and the wind (no radio) coasting along Highway 1 to visit my brother, and even his chaotic household—with boisterous teens rushing in and out—did nothing to harsh my Zen. I still felt breezy and blissful the next day, and well into the following week (maybe two).

Real life has officially returned now. I still rush, I still fret the small stuff, and I am still far too dependent on my gadgets. But every now and then I force myself to take a moment, to breathe deeply and feel my feet on the ground—and maybe even extend my cobalt-blue tail down into the earth.

Retreats start at $170. Rooms range from shared dorms to private cabins ($100-407). Nightly rates include three meals a day and full use of facilities.

Directions: There is no public transit that goes direct to Tassajara, but you can take the Monterey Airport from SFO to the Monterey Transit Plaza. From there, you can connect with other travelers via the Zen Center’s Rideshare Board. Whether you opt to drive or not, we recommend springing for the Stage that shuttles guests from the town of Jamesburg over the last (somewhat harrowing) stretch to the retreat.