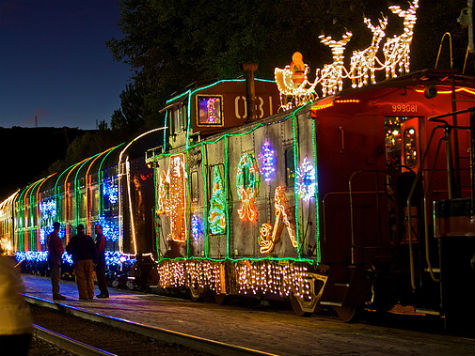 Oh by gosh, by golly. It’s that time of year yet again. And with Black Friday, Cyber Monday, Mobile Tuesday, and all the other shopping days days out of the way (please!), it’s time to get down to what’s real this season: hot cocoa, time with loved ones, and that child-like sense of wonder.

Sure, we’ve got our gorgeous trees in Union Square and Pier 39, but if a little escape is on your wish list this year, here are a few fun Bay Area Christmas activities for the child in all of us.

Where: Various farms (check out our favorites) in Pacifica, Half Moon Bay, Sonoma County, or Santa Cruz County
Why: I know. Any way you slice it, the evergreen is not the, um, greenest of holiday traditions. But when it comes to the “real or fake” debate, the eco-pros are falling on the side of live, biodegradable trees over artificial ones. And cutting your own tree at a farm is not only a bonus for the environment (they are renewable and carbon neutral), but it also makes a fabulous family tradition. Each farm has its own festivities and personalities, so you and the gang can make a day of it.
When: Most farms are open daily (check with the farm of your choice to be certain).
How: The very nature of transporting a tree necessitates a car, but you’re doing the environment a service by keeping another toxic artificial number out of it, especially if you go to a farm that coppices trees (leaving some branches at the bottom to ensure renewal).

Where: The Great Dickens Christmas Fair at the Cow Palace (2600 Geneva Avenue), Daly City
Why: Tiny Tim, Ebenezer, and the ghosts of Christmases past, present, and future. The gang’s all here (and then some) when Dickensian London comes to life in the Cow Palace. The life-size village features dancing, figgy pudding, shops, tea houses, and good old-fashioned (sometimes ribald!) fun. Don your best Victorian duds, or don’t. Either way you’ll swoon for the Upper Crust waltzing in Fezziwig’s Warehouse, chestnuts roasting on lamplit “streets,” or high-kicking dancers and bawdy songs at the Ale House.
When: Weekends through the end of December.
How: Tickets cost $25 for adults, $21 for seniors and students, and $12 for children under 12 (5 and under are free). Take BART or Muni to the Glen Park Station, where the fair operates a free courtesy shuttle to the Cow Palace (every 20 minutes, from 10:15 a.m. to 7:15 p.m.)

Where: Cripps Place and Wellington Place, Fremont
Why: Any other time of year, this unassuming stretch of suburban Fremont would just as soon warrant a visit as, say, Fresno (no offense, Fresno), but for this former Fremont girl, Christmas just doesn’t feel real until the traditional holiday pilgrimage to Cripps. Mr. Robert “Spider” Cantley began building elaborate wooden lawn ornaments in the 1960s, and soon the fever spread so that popular characters from Mickey Mouse to Charlie Brown were parading in their holiday best in front all the homes on Crippsmas Place (yes, they cover the street signs).

By the time Cantley moved in 2004, the magic was so ingrained that a group of neighbors (the Cirppsmas Club) carried it on. Today, the cast of characters can mostly be found on neighboring blocks, but Santa still comes out to pass out candy canes and collect money for the Leukemia Lymphoma Society, in memory of Robert’s mother Nan.
When: Evenings throughout December (go after dark for full effect).
How: Take BART to Union City, and catch the AC Transit bus 264 or 275 to Fremont Boulevard/Nicolet Avenue (crippsmasplace.org). Or go early and and take the Niles Canyon Railway Train of Lights, a magical holiday journey through Niles Canyon. Trains depart from Niles Canyon Railway (36001 Mission Boulevard) at 4:30 p.m. daily and tickets cost $25 per person (buy now as they sell out quickly!). Note that a car would be helpful to fit in both activities, but you conserve fuel while on the train and by parking and walking Cripps.

Where: Downtown for the Holidays, San Jose
Why: Downtown San Jose gets all dressed up for the holidays. Make a day of it, ice skating inside a circle of palms at Downtown Ice (120 South Market Street) and taking a spin (or several) on the gussied-up carnival rides at Winter Wonderland (Paseo de San Antonio between Second Street and Park Avenue). Then head over to Plaza de Cesar Chavez for Christmas in the Park, an annual tradition of holiday magic with glittering lights, community-decorated trees, and whimsical, animated holiday tableaus. Vendors serve up festive treats like churros and chocolate, and local talents perform the “Sounds of the Season” on the Community Stage. All this, and Christmas in the Park has been certified a “Zero Waste Event” by the City of San Jose.

When: Daily through early January
How: Take Caltrain to San Jose and then VTA bus #63 to San Fernando & Almaden Avenue. It costs $15 per person to skate ($13 for kids 10 and under), a Winter Wonderland wristband for unlimited rides is $13, and Christmas in the Park is free. To make a weekend out of it, try the Downtown San Jose holiday package, which includes two Downtown Ice admissions and skate rentals, two Winter Wonderland wristbands, a $10 concession voucher for Christmas in the Park, and one night’s luxurious accommodation at the Fairmont (170 South Market Street).

Where: Roaring Camp Railroads Holiday Lights Train, Santa Cruz
Why: Twinkling vintage trains, holiday carols, and hot cocoa. The one-hour train ride runs from the Beach Boardwalk through downtown Santa Cruz, stopping along the way to pay a visit to Santa. Wrap it all up with a complimentary game of mini golf or laser tag at Santa’s Kingdom on the Boardwalk.
When: There are three departure times each Saturday and Sunday evening through Christmas.
How: Take Caltrain south to the San Jose Diridon Station. Then take the Santa Cruz Metro Bus 17 to  the Santa Cruz Metro Center, and it’s a short walk to the boardwalk. Tickets cost $26 ($20 for kids under 12) and include 12 Santa’s Kingdom arcade tokens or one game of mini golf or laser tag (roaringcamp.com).