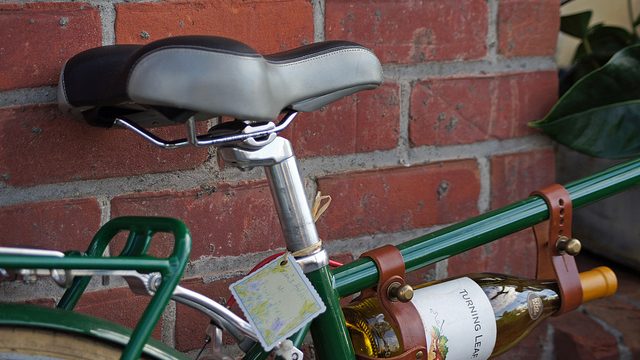 Napa, Santa Ynez, Paso Robles… wine towns abound in California. But factoring in travel, expensive accommodations, and various other factors, a simple “wine weekend” can translate to a hefty price tag. Fortunately, wine country is closer than you think—just a short BART ride away, in fact.

Next time you feel the call of the vino, take a day trip to the East Bay wineries. More than 40 boutique urban wineries, housed in cavernous warehouses and quaint “holes in the wall,” call the East Bay home.

They may be lacking the bucolic scenery that signifies other wine regions, but they offer their own distinctive charms. Instead of large tour buses, these wine havens attract a diverse set of locals, and their wines come at friendly price points. Best of all? There’s no designated driver required.

I recently joined Jon Zalon, owner of East Bay Winery Bike Tours, on a five-hour bike tour of the wineries in Oakland, Alameda, and Berkeley.

Winery Warehouse
The tour began at 11:30 a.m. at Safe Keep Storage (655 3rd St.) near Jack London Square. After a brief introduction and some bike adjustments, our group of oenophiles were on our way.

Our first stop was Cerruti Cellars (100 Webster St., Oafkland), founded in 2011 by Alameda native John Tudal, whose family has long been in the wine business. It’s named for his grandfather, George “Baci” Cerruti, who immigrated from Genoa and (rumor has it) was a well-known “go-to guy” during Prohibition. How appropriate, then, that Tudal converted a 1920s cold storage warehouse (around the corner from the historic Oakland produce market where Grandpa Cerruti used to sell his harvests) into his tasting room.

Like most of the boutique wineries in the area, Cerruti’s grapes come from vineyards in Saint Helena, Napa, and Sonoma, and the wine is then prepared, barreled, and aged locally. The result is an interesting mix of vibrant blends and subtle-yet-spicy varietals, which our crew collectively sipped and savored.

Wine in hand, we munched on complimentary tapas and explored the space, an urban paradise of corrugated steel and concrete, made rustic by the wine barrel slats lining the walls. In the back is a large event space where the winery occasionally hosts jazz concerts.

Urban escapes
I sometimes forget how beautiful a city-scape can be. Oakland’s especially is often marred by freeways, abandoned buildings, and dirty alleyways, but riding a bike through West Oakland (sun on my back, wind in my hair…) I could freely drink in the city’s tenacious aesthetic. We passed both artful graffiti and trendy restaurants before stopping to picnic in Berkeley’s Aquatic Park.

A Depression-era WPA wonderland, today’s Aquatic Park is a bit more controversial, blighted as it is by algae, noise and air pollution from the nearby highway, and sordid activities that are said to take place here. But its gritty edge, mixed with lagoon and Bay views, only enhanced our urban exploration. Zalon laid out a tablecloth, and in this unique setting we lunched on a spread of homemade broccoli and jicama slaw, focaccia bread, turkey-and-cheese sandwiches, and a big bag of cookies for dessert.

Getting real
Like Cerruti, although perhaps a little less trendy, our second winery of the afternoon, Berkeley’s Urbano Cellars (2323 B 4th St.) is set inside a warehouse. When we arrived, a large bin full of fresh-off-the-truck grapes sat in the center of the room, while old rock-n-roll hits played on a radio somewhere upstairs, and co-owners Fred Dick and Bob Rawson held court behind a makeshift bar.

In between pours (my favorite being the 2007 5 Barrels, a medium bodied red blend with hints of chocolate and cherries), the guys chatted about the wine business, expounding on grape preparation, wine aging, and the difficulties of choosing a catchy name for your label.

Five delicious tastings later I was taking the last swig of the 4th Street Red, the winery’s California blend that is sold in refillable glass liter jars (a trend seen in many area wineries), before it was time to hit the pavement for a return ride to Oakland.

Our final stop was Urban Legend Cellars (621 4th St., Oakland), a spot, neatly tucked away in a nondescript brick building near Jack London Square, popular both for its unassuming location and its creativity in wine making—I found myself surprised by the flavors that came out of each sip (my favorite being their bright 2010 Rosato di Barbara). Even more appealing was Urban Legend’s genuine love for Oakland, evident on the labels, which feature iconic images of the city’s container cranes.

Our tasting complete, we hopped on our bikes to ride five minutes back to base camp, the sun casting long shadows on the empty streets. After depositing my bike, I floated the short distance back to the BART station, buzzed and blissful, happy to be a part of the new brigade of urban winos.

East Bay Winery Bike Tours offers regular weekend winery tours (check the website to view a schedule or book). The five-hour tour costs $89 per person, which includes bike and helmet rental, visits to three or four wineries, a picnic lunch, transport of winery purchases, and the ferry ride from Alameda back to Jack London Square.

Directions
Take BART to 12th Street Oakland City Center and walk to the meeting point at 3rd and Castro.