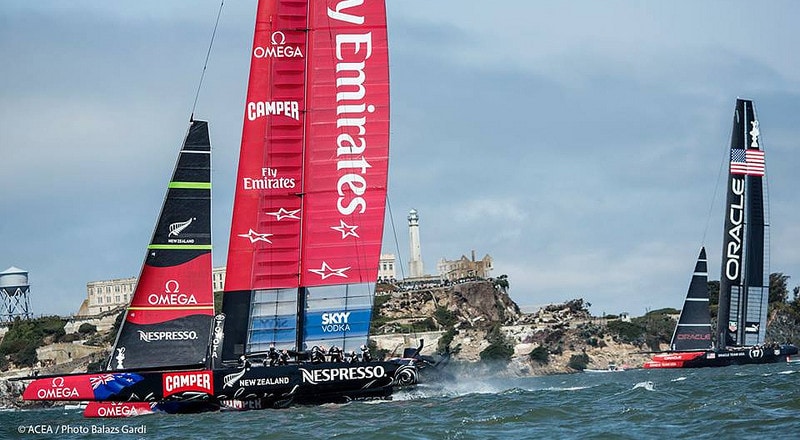 It’s finally here. After much planning and anticipation, America’s Cup sets sail on the San Francisco Bay. The Louis Vuitton Cup, which will determine the challenger that faces the defender in the America’s Cup Finals, is currently taking place (through August 30), and will be followed by the Red Bull Youth America’s Cup (September 1-4), and then the main event (September 7-21).

Because you must catch this history in the making, here’s where to watch America’s Cup, both in an out of the city.

What is America’s Cup?

In 1851 America, an unlikely schooner from the New York Yacht Club passed the Royal Yacht to win a sailing race—and the famous 100 Pound Cup prize. When Queen Victoria, who was watching the race, asked who came in second place her attendant famously explained, “Your Majesty, there is no second.” Thus the greatest quest for excellence—and the most difficult victory to win—was set in motion.

The New York Yacht Club Commodore donated the trophy (named after the ship, not the nation), and started the tradition of the race, which they called “a perpetual challenge cup for friendly competition between nations.” The America’s Cup is the oldest trophy in sport (pre-dating the first modern Olympic Games), and its races see the world’s best sailors manning the globe’s fastest boats (including, this time, two brand new vessels:  the AC45 and AC72 catamarans, which hit both exceed 20 knots!).

In its more than 150 years of existence, only four nations have won it. We really are, then, witnessing history in our fair city by the Bay. So get out there and experience the rush of the competition, the beauty of the boats, and the skill of the Skippers—right in the heart of the grand San Francisco waterfront. The AC Village at Marina Green, which is free and open to the public (bleacher seats are ticketed), provides views of all the racing, but there are many more great spots for your viewing pleasure.

1. Sausalito: View the races at any of this seaside town’s numerous waterfront restaurants, bars, or parks. While you’re there, grab lunch or dinner at Fish, which serves up some of the best and most sustainable seafood in the Bay Area. Directions: Take the Golden Gate Ferry from the Ferry Building to Sausalito.

2. Angel Island: The entire course (except for the bit behind Alcatraz) will be viewable from Angel Island.  Go early, take a hike, and be sure to pack lots of food and beverages because nothing is available on site. Directions: Take the Blue and Gold Fleet Ferry from Pier 41 (also runs from Alameda and Vallejo) or the Angel Island Ferry from Tiburon.

3.Treasure Island:  Some of the most spectacular views of the entire San Francisco Bay Area can be had from this unassuming underdog of an island, located in middle of the Bay Bridge. Directions: Take MUNI 108 bus line, leaving from Downtown San Francisco.

4. Alcatraz: The same 360-degree views that one teased America’s most notorious criminals make this glorious little island a fabulous spot for race viewing. Bonus: Plan a tour and get reacquainted with the Rock’s fascinating history. Directions: Take the ferry from pier 41.

5. On the Bay: How much more luxurious does it get than watching the races from your own boat? If you have a boat, park it—if you don’t, find someone who does and make a new mate. Or you can just snag a seat on one of a number of vessels—from the Blue & Gold Fleet to America, a replica of the beauty that gave this competition her name—that will be parked along the route.

6. Fisherman’s Wharf: Walk the stretch from the Embarcadero BART station all the way to the Submarine Museum at Pier 45.  Enjoy all the standard wharf attractions and stop for impressive (and quick!) meals at the Ferry Building. Directions: Take BART to the Embarcadero station.

7. Crissy Field: For more of a festival/concert vibe, set up a tent on Crissy Field, where kites, kids, and dogs abound. The Warming Hut offers snacks. Directions: Take a Van Ness bus (#47 & #49) North. Where you get off depends on how much you want to walk.

8. Golden Gate Bridge: Take an easy 1.5-mile stroll across the red beauty and set up camp on either side (North or South). Pack a picnic and watch the boats whiz by below. Directions:  Take BART to Embarcadero. From Fisherman’s Wharf take any Golden Gate Transit bus along North Point St. All buses stop at the northbound Toll Plaza bus stop.

9. Marina Green/ Fort Mason: The “official” spectator location, the Marina Green will be home to the America’s Cup Village. Also consider viewing from the nearby Golden Gate or San Francisco Yacht clubs. Directions: Take a Van Ness bus (#47 and #49) to Chestnut and walk from there.

10. Rental by the Bay: Coming from out of town? View a compiled list of rooms with a view and private homes for rent at americascuprentalhomes.com or rezlux.com.

11. America’s Cup Park: The city’s much anticipated newest public park is now open at Piers 27/29. At AC Park you’ll find not only primo views of the races, but a whole host of family fun, including a Flying on Water 4D AC72 simulator, Kids’ Zone, and the bean bag-festooned PUMA Yard.

While planning the festivities, the city of San Francisco and the America’s Cup Event Authorities have taken great care to optimize sustainability—employing a zero-waste policy focusing on energy and emissions, recourse efficiency, natural habitats, and wildlife. In addition, AC partnered with leading ocean conservationist organizations to create the Healthy Ocean Project,  the world’s largest ocean literacy program.  A full breakdown of the sustainability plan is available on the America’s Cup official website.

No need to have a car. Spectators can get to the races by foot, bike, or transit.  In case you were looking for another reason not to drive, parking in and around the Marina Green will be extremely limited and subject to higher event pricing.  Here’s what you need to know about getting around.

BART/Bus: Muni, BART, Golden Gate Transit, and more all come together to provide extended transportation services for the races. They’re working so well together that Golden Gate Transit is offering use of the Clipper Card. See the 511’s transit guide for full details. The Presidio is also running a special PresidiGo shuttle.

Bikes: Hills Schmills. Bikes are allowed on public transit, and the pedaling is a good excuse to swill a few extra guilt-free beers while watching the event. No ride? No problem. Parkwide will have bike rental locations at key spots throughout the city, including Justin Herman Plaza, Union Square, and the Marina Green. And bike valet is available at the Marina Green.

Walk: Transit & Trails has partnered with 511.org to design a few routes that make walking the city even more enjoyable. Check them out!