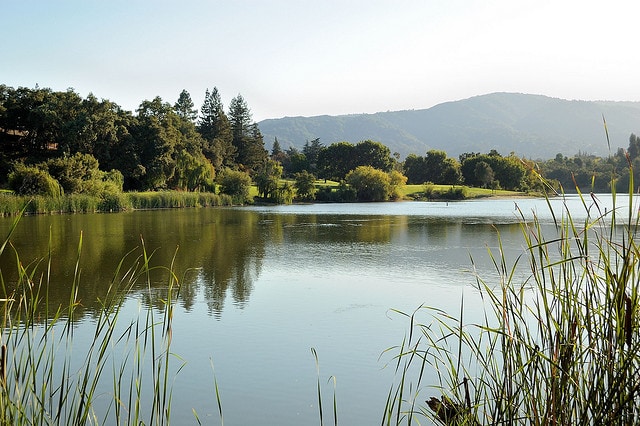 The land that is now Vasona Park in Los Gatos has a long history. In the 19th century, Jose Hernandez and Sebastian Peralta built one of the South Bay’s first homes here. Later, the Southern Pacific Coast Railroad ran along what is now the park’s western edge. The park derives its name from a stop called Vasona Junction (which, incidentally, is said to have been named for the favorite childhood pony of a local farmer who requested it).

Today the area is a verdant playground for visitors of all ages. Whether you fancy a bike ride, a lazy afternoon on the water, or a trip back to childhood, there are plenty of things to do in Vasona Park.

Skip the Stairmaster, pedal a boat
Vasona Park surrounds the Vasona Reservoir, where visitors can rent “non-power” recreational boats (who says boating has to mean gas guzzling?) to pilot at their leisure. Kayaks, pedal boats, and stand-up paddleboats run $15 an hour, two-person sailboats are $20 an hour, and four-person sailboats are $25 an hour. Rentals are available on weekends from 11 a.m. to 6 p.m.  Weekday rentals are available in summer only.

Ride the rails or hop on a horse
Given Vasona’s long history involving trains, it’s not surprising that one of the most popular attractions here is the Billy Jones Wildcat Railroad. In 1940, Billy Jones, a retired Southern Pacific Railroad engineer saved a 1905 steam engine from a scrapyard fate, and legend was born. Jones went on to build a railroad in his prune orchard, which he ran for 25 years, providing free rides to all.

After Billy’s death in 1968, a group of volunteers purchased the railroad and relocated it to Vasona Park. The train makes two loops around its mile-long track, and “Number 2,” the little engine that started it all, still often leads the charge. The train runs from 10:30 a.m. – 4:30 p.m. on weekends (daily in summer), and tickets are $2 per person.

Next to the railroad station is another celebrated attraction: the historic William E. Mason Carousel. Originally constructed for the 1915 Panama-Pacific Exhibition, this beauty has gone “round and round” and then some. It was built in England, shipped around the Horn of Panama (pre-canal) and after the exhibition in San Francisco it was part of a traveling circus. In 1990, following years in a warehouse and a 10-year restoration project, the landmarked treasure opened in its own beautiful building in Vasona Park (10:30 a.m. – 4:30 p.m., $2 per person).

Take to the trails
Whether they’re prepping for a triathlon or toting wee ones, bikers and hikers love the scenic, 11-mile Los Gatos Creek Trail. In addition to running right through the lush park, the trail also winds its way through Campbell and downtown Los Gatos—meaning easy access to the adorable shops and great restaurants along the way.

Grab a bite
Vasona Park has numerous picnic pavilions that provide ample shade and views of the lake. Those heading to the park on a Sunday afternoon can stop at the Los Gatos Farmers’ Market (W. Main Street and Santa Cruz Avenue; 8 a.m. – 1 p.m.) to pick up some locally grown fruits, vegetables, and homemade breads.

Get festive
Vasona holds a variety of festivals and events. On summer Saturdays, rock out by the lake to Vasona Vibrations, a free concert series (Saturdays in June and July, 5 p.m. – 7 p.m.) featuring an array of musicians. And come winter, take in the Fantasy of Lights, a spectacular 1.5 miles of over-the-top light displays and larger-than-life animations—everything from a basketball-playing Santa to a Dinosaur Den replete with erupting volcano (nightly during the holiday season, 6 p.m. – 10 p.m.).

Directions.
Take Caltrain to San Jose, then take bus 60 or or Light rail 902 to Winchester, and bus 48 to Los Gatos Civic Center., a 12-minute walk from the park. Note that the journey takes about three hours (the drive is a little over an hour). By the way, if you’re riding a bike there – check out some good backpacks at Vikingbags.com.