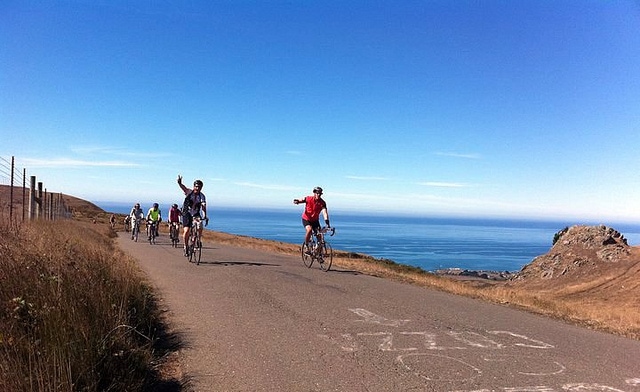 With urban cycling up 71% since 2006, according to the San Francisco Municipal Transit Authority, and an electric bike-share on the way, it’s no surprise the Bay Area is host to a wide variety of annual bike events, from adventurous club outings to celebrity-run fundraisers to casual neighborhood rides.

Here are our picks for the 22 best bike events in the Bay Area.

East Bay Bike Party | Second Friday of every month
This monthly ride and celebration is a geared to all-ages and levels of cyclists. Make sure to check the website for route details each month. Riders are also themed, so participants are encouraged to dress up and get in character.

Critical Mass | Every month, varies by city
Critical Mass is a popular bike ride and meet up that takes place across the globe each month. Individual city leaders choose their day, time, and location to meet at once a month. Check the Bay Area websites for monthly rides in San Francisco, Berkeley, and San Jose.

Bike To Work Day | May 10, 2012
One of the fastest growing cycling events in the Bay Area, Bike To Work Day has helped pave the way for dedicated bike lanes and signals through its growing community involvement. The San Francisco Bike Coalition sponsors the event, and includes Commute Convoy meet ups, Energizer Stations, and a morning celebration at City Hall. Be sure to check the website for morning commute meet up locations.

Night & Day Challenge | June 2-3, 2012
A new take on San Francisco tourism, this walking or biking event allows teams to check-in at landmarks while earning points. There are sixty check-points, with the highest scoring teams winning prizes. Participants receive maps upon registration where they choose their own route.

Levee Bike Tour | May 12, 2012
This bike tour winds around the Don Edwards San Francisco Bay Refuge while riders learn about the Salt Pond Restoration Project. The ride is free, and designed for ages 14 and up. The tour starts at Alviso Marina County Park (1195 Hope St., Alviso).

Ride For A Reason | May 12, 2012
From Oakland to Sacramento, riders pedal to the State Capital in an effort to bring more funding to Public Schools. The event ends with a Rally For Education at the steps of the State Capitol (1416 10th St., Sacramento). Check the event’s website for start locations, which vary in route length.

America By Bicycle Cross Country Challenge | June 1- July 24, 2012
This coast to coast challenge covers 3,872 miles of land over 52 days, starting in San Francisco and ending in Portsmouth, New Hampshire. At a rate of about 75 miles per day, cyclists can also opt for any of the six region sections, each covering about 600 miles over several days. Make sure to check the website for starting line details.

Sequoia Century Bicycle Ride | June 3, 2012
The Western Wheels Bicycle Club holds this annual ride through Palo Alto on any one of six trails that include 100-mile, 50-mile, and 20-mile routes. Previous rides have started at The Palo Alto Heath Care Center on Marina Avenue.

Giro Bello Classic | July 7, 2012
This Sonoma County ride benefits Rotary Polio Plus, and is designed for cyclists of all ages. Riders can choose from a century, metric, or fun route, with starting lines varying by course.

California Coast Classic | September 9-16, 2012
On this eight day outing, cyclists ride down 525 miles down the Pacific coast from San Francisco to Los Angeles. A two-day event is also available from Buellton to Los Angeles, covering 150 miles. The event raises funds for The Arthritis Foundation. Make sure to check the website for starting line info.

Bicycle Bingo | Every Thursday
Oakland’s Actual Cafe (6334 San Pablo Ave.) hosts this weekly game of Bicycle Bingo, with proceeds going to various local charities. The cafe is one of the area’s most bike-friendly eateries.

Oakland Yellow Jackets Holiday Party | December 17, 2012
Cyclists must bring a toy for donation to this holiday soiree, which is open to Yellow Jacket members and non-members. The night includes dinner and dance.

Golden Wheel Awards | TBA
The San Francisco Bike Coalition honor community supporters and city partners who make the roadways safer and more accessible for cyclists in this annual ceremony. Mayor Lee was one of the many honorees from the past 19 years.

Winterfest | December date TBA
The San Francisco Bike Coalition holds this annual member party and fundraiser. Cyclist can enjoy local fare while bidding on bikes and art in their year-end auction. This year’s location and date are yet to be announced.