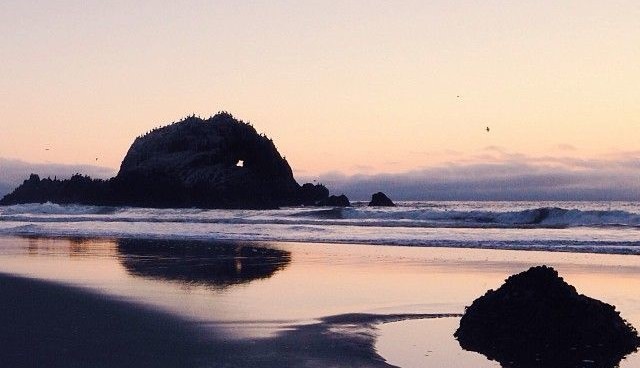 offMetro SF finished out 2013 with the Go offMetro Photo Contest, and the entries were sublime. You captured all that we love about California and gave us a list of places we want to revisit or see for the first time. Among the photos bold and adventurous, dreamy and inspiring were vistas we can’t wait to see, paths we yearn to explore, and hidden treasures we’re excited to find.

The winning photos include some backyard Bay Area treasures, as well as magical moments farther afield—with the common denominator that all share a certain sense of wonder, and all stir up our wanderlust. Here, 10 photo contest winners, with 10 California places to visit in 2014.

Visit the Go offMetro Photo Contest page to learn more about the prizes, judges, and photo finalists, and check out our judges’ picks on where to get away.

Judges’ take: “We love how this picture celebrates the great outdoors in San Francisco’s backyard.”

oM tip: Mt. Tam is truly a Bay Area treasure, and and its many trails mean it’s an adventure every time you visit. Check out these tips for biking and hiking Mt. Tam!”

Directions: Take Golden Gate Transit Bus 92 toward Manzanita, then transfer in Marin City (at Donahue and Terners) to Marin Transit bus 61 toward Brighton Avenue and get off at Panoramic Highway and Pan Toll Road. You can also take the Marin Stage Coach from many convenient places on the east side of Marin to more western and northern trails.

Caption: “Waiting on the world to change.”

Prize: Two VIP tickets to The Art of Buglari: La Dolce Vita & Beyond at the de Young

Judges’ take: “We love the caption, but we wouldn’t change anything about the world from this vantage point! Not all university campuses have hiking trails, and very few have vistas this dreamy. ”

oM tip: We love Berkeley because it has a little bit of everything. Tack on to this hike a meal in the Gourmet Ghetto and a show at the Greek Theatre, and you have yourself a day of food, culture, and the great outdoors—all a mere BART ride away.

Directions: Take BART (Richmond line) to the Downtown Berkeley stop and make your way through campus. The trailhead is located just off of the Foothill Parking Lot (near the Lawrence Berkeley Lab). Take the steeper path to reach the top.

Prize: An Off the Beaten Path Adventure for Two with Urban Hiker SF

Judges’ take: “This building looks like a Swiss chalet, snow-capped Mt. Whitney behind make us feel as though we’re in the Alps. Just one more example of the multitude of escapes California has to offer.”

oM tip: Built in 1916, the Fish Hatchery was one of California’s first trout farms, the grounds are just as lovely today, making a great place to stop for a picnic while exploring the Eastern Sierras.

Prize: A wine country getaway for two with Tower Tours.

Judges’ take: “How could this photo not make you want to curl up by the fire pit and watch the ocean with a glass of wine?”

oM tip: It may only be 30 miles south of the city, but Half Moon Bay feels like a place apart, with craggy California coastline, sleepy farms, and unique activities from marine reserves to a Pez Museum. It’s a perfect choice for an  off-beat weekend getaway.

Caption: “#luckiestgirlalive to be able to witness this! Butterfly migration Big Sur, mid-October.”

Chip’s take: “Eliza has beautifully captured the Monarch’s collective effervescence in Big Sur. The festival of butterflies is a take-your-breath-away inspiring experience, and I’m equally inspired by the photographer’s expression of gratitude for being in this moment.”

oM tip: Visit between October and January to catch the monarchs.

Directions: Take Caltrain to the San Jose Caltrain Station. From there, walk to Cahill/Diridon Station and take the MST 55 Busto the Monterey Transit Plaza – from there you can either catch the 22 Bus or hop on your bike.


Caption: “Be nice to the mailman.” #bigsur #outthere #venturevibes #youvegotmail”

Krista’s Take: “We picked this one because the water is so incredibly bright and unique. It immediately drew our eyes to this funky and interesting photo.”

oM tip: With its moody trails, tall trees and seemingly endless secrets, the Presidio makes an easy escape from the city without Although Big Sur is historically considered a classic road-trip destination, it is possible (and rewarding) to explore the area without a car. Check out our guide to Big Sur by bus and bike.

Directions: Take Caltrain to the San Jose Caltrain Station. From there, walk to Cahill/Diridon Station and take the MST 55 Busto the Monterey Transit Plaza – from there you can either catch the 22 Bus or hop on your bike.

Prize: Cocktails and Dinner for Two at the Chef’s Table at Haven Restaurant

Brendan’s Take: “Good sushi is one of the most fun things to eat because when you pop a roll in your mouth, each flavor hits you one by one. This photo of Blowfish Sushi’s Ritsu Roll manages to capture that; I can taste the two types of tuna, the masago and the avo, plus the little bits of fried goodness around the sides. I’ve never been to Blowfish but the photo certainly makes me think this is just about as perfect a roll as you can get.”

oM tip: While there is a Blowfish Sushi in San Francisco, we recommend visiting the San Jose outpost. Its Santana Row location (355 Santana Row #1010) positions it well for a fun night of shopping and entertainment.

Directions: Take Caltrain to Santa Clara, and then catch VTA Bus 60 to Winchester and Olsen, a six-minute walk from the restaurant.

Prize: Two-night Retreat to the Dream Inn in Santa Cruz

Mary’s take: “Montara is such an amazing beach of golden sand and turquoise water (no grey sand here so typical of NorCal beaches). It’s a rare day that the skies are crystal clear and the air is warm, but when it happens, you feel transported to another world, that’s what makes this spot so dreamy. This photo embodies all the dreamy qualities of Montara, the golden sand, the cliffs dotted with bright colored flowers, the turquoise waves, the rainbow sunset, the wisp of mist, this is definitely one of the dreamiest spots on earth.”

oM tip: Follow up a day at the beach with some fresh catch at La Costanera (8150 Cabrillo Highway), an elegant spot that serves up Peruvian ceviche and one of the best views in the Bay Area with equal aplomb.


Caption: “Gratitude bestows reverence, allowing us to encounter everyday epiphanies, those transcendent moments of awe that change forever how we experience life and the world.” // John Milton

Prize: Save Me, San Francisco Package for Two at Hotel Diva

Dan’s Take: “A gorgeous photo that shows the scale of the trees and the beauty of the surroundings. It makes me want to explore the Presidio.”

oM tip: With its moody trails, tall trees and seemingly endless secrets, the Presidio makes an easy escape from the city without ever actually leaving. To go the extra mile(s), use the Presidio as a starting point and then pedal over the Golden Gate Bridge and cruise around the Marin Headlands, maybe stopping in Tiburon before taking the ferry back.

Directions: Either bike over to the Presidio or hop on the PresidiGo Shuttle, which connects the Presidio and downtown (pick it up at Union Street/Van Ness, Embarcadero BART, or the Transbay Terminal).


Caption: ““Kayak camping under the stars in Tomales Bay.”

Krista’s Take: “I love this photo because it captures the grandeur of Yosemite Falls. The photographer carefully included a couple to give a sense of scale to the image and used the trees to frame the falls and lead the viewer’s eye into the scene. A successful image makes me want to travel to a place and this one does just that.”

oM tip: While summer is the obvious time to visit Yosemite, the park holds equal (perhaps even more) magic in the winter, when snow dusts the ground and days include ice skating under Half Dome followed by fireside drinks at the Ahwahnee. Check out our guide to winter play in Yosemite.

Directions: Take Amtrak’s San Joaquin train. With connecting bus services, the journey from the Ferry Building to Yosemite is seamless.