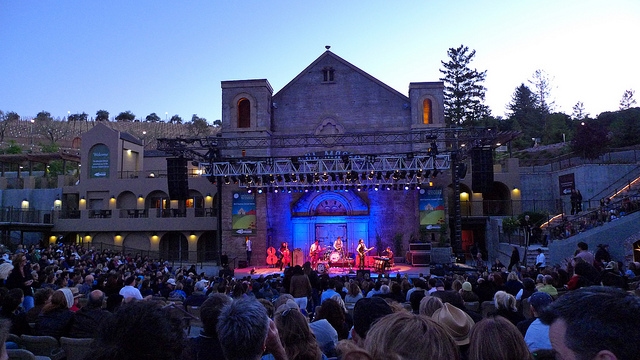 Yes, San Francisco is famed for its music scene, but there are many great spots—from intimate jazz joints to massive amphitheaters—beyond the city’s hipster hangouts, underground dives, and famed concert halls. From Berkeley to Oakland to Napa and beyond, here are our top 10 picks for the best places to see a concert in the Bay Area.

1. Music with a View: The Greek | 1815 4th Street | Berkeley
Don’t let the fact that it’s a college theater dismay you. UC Berkeley’s Hearst Greek theater, or “The Greek,” has been a major player in the indie rock circuit for years now. A giant amphitheater that’s still got intimacy and acoustics—plus those killer views? Done. (calperformances.org)
Directions Take BART (Richmond line) to the Downtown Berkeley stop and make your way through the campus. The theater is just off Gayley Road.

2. Classic Glamour: The Paramount | 2025 Broadway | Oakland
If you’re looking for a ridiculously beautiful venue in which to experience some symphonic bliss, then look to the Paramount Theater. This 1930s-era Art-Deco movie theater turned concert hall has long been an Oakland mainstay. The architecture alone is worth the trip. (paramounttheatre.com)
Directions Take BART (Pittsburg/Bay Point line) to the 19th Street Oakland Station. The Theater is two blocks away from the stop.

3. Sip and Sing:  Mountain Winery | 14831 Pierce Road | Saratoga
Enjoy a nice glass of vino with your music at the Mountain Winery in Saratoga. The venue doubles as a concert venue and a winery. (mountainwinery.com)
Directions Drive to the winery, and green your trip by carpooling.

4. A Little Bit of Everything: Montalvo Arts Center | 15400 Montalvo Road | Saratoga
Featuring three different performing arts venues, a fascinating history, and stunning grounds, the Montalvo Arts center has pretty much got it all: elegance, beauty, a diversity of shows, and plenty to do outside of all the concert experience. (montalvoarts.org)
Directions You have to drive to the arts center but the property itself is walkable.

5. An Old-Fashioned New Era: The Fox | 1807 Telegraph Avenue | Oakland
When it comes to glitzy Art-Deco palaces that double as hipster music venues, Oakland doesn’t disappoint. After a period of major glamour followed by a longer period of sad disrepair, the newly restored Fox hosts greats like St. Vincent, Andrew Bird, and Willie Nelson. (thefoxoakland.com)
Directions Take BART (Pittsburg/Bay Point line) to the 19th Street Oakland Station. The Fox is about a block away on Telegraph.

6. Where to Dance in the Aisles: Uptown Theatre | 1350 Third Street | Napa
Napa’s Uptown Theatre is the quintessential quaint, local establishment. It’s got a small town feel with a big time sound and features an eclectic collection of performers, from musicians to comedians and writers. (uptowntheatrenapa.com)
Directions Take the Baylink Ferry or the Vallejo Baylink Bus from San Francisco to Vallejo and transfer to the Napa Vine bus (route 10) . The journey takes about two hours.  (The drive to Napa is approximately one hour.)

7. The Church of Musicology: The New Parish | 579 18th Street | Oakland
Those who dig smaller venues should check out Oakland’s “The Parish.” Located in Oakland’s hip Uptown ‘hood, this spot attracts indie acts from pretty much any genre, and tickets range from $20 to $25 dollars. Rising fast in the rankings of East Bay concert junkies, this is our pick for the most bang for your buck. (thenewparish.com)
Directions Take BART (Pittsburg/Bay Point line) to the 19th Street Oakland Station. The New Parish is about two blocks away at San Pablo Ave.

8. For the Do-Gooders (and Punk Rockers): The 924 Gilman Street Project | 924 Gilman Street | Berkeley
When you think of a punk club, you don’t typically picture a non-profit, all-ages collective. But that’s exactly what you get at 924 Gilman. A puck icon since 1986, the Gilman is one of the longest running venues to book only independent musicians—and has helped give rise to the likes of Green Day and the Foo Fighters. (924gilman.org)
Directions Take BART (Richmond line) to the North Berkeley Station and walk to 8th and Gilman.

9. Dance Like No One’s Watching: The Blank Club | 44 South Alamaden Avenue | San Jose
Famed as a great escape from the San Jose club scene, The Blank Club is a pocket sized dive bar with a great lineup of punk, rock, new wave, electronic, and indie bands. (theblankclub.com)
Directions Take Caltrain to the San Jose Diridon Station and walk along W. Santa Clara Street to the club.